How to get more out of prison registers: Part 2

In this second post, Rosalind will assess the reliability of the personal data on individuals contained in prison registers.

Last week I gave an account of the evolution of prison registers, explaining how a type of record which served a purely functional purpose – to keep track of who had entered the prison and who had left – expanded to become a near-unrivalled repository of personal data on tens of thousands of individuals.

By the middle of the 19th century, most prison registers contained information on the ages, birth places, current residences, occupations, religion, education, families, and physical characteristics of each incarcerated individual. From the late 1850s, some even included photographs. This wealth of personal data has a range of applications – for family historians, local historians and social historians.

But can we trust it? Historians have had their doubts.

For example, in a recent study, Donald Fyson and Francois Fenchel raised concerns about the capability and commitment of officials – warders or clerks – to record data on prisoners. They painted an evocative picture of a grumpy, ill-paid turnkey, raised from his sleep to admit a drunk and disorderly prisoner, who had little interest in collecting accurate information for the register.

Some categories of information – such as heights and weights – would have required specialist equipment to make accurate recordings. Scales are mentioned in convict prison rules and regulations from the mid 19th century, and appear in some correspondence between local prison officials. But what about smaller local prisons? And I have yet to find references to rulers or tape measures for the assessment of height.

And what about categories of information in registers which relied on the testimony of prisoners. Can we assume that prisoners told the truth? The presence of aliases in registers suggest that they sometimes tried to hide their identity (and previous convictions). Historians such as Robert Shoemaker and Richard Ward have warned us not to forget the agency given to prisoners in this process: that prisoners may well have used the opportunity to shape narratives about themselves.

As certain information was used to determine prisoners’ experience of incarceration, it is conceivable that some prisoners gave false information in order to gain advantage. For example, some prison chaplains reported that prisoners claimed to be illiterate in order to gain admission to the prison school, while others exaggerated their reading and writing skills to avoid enrolment. 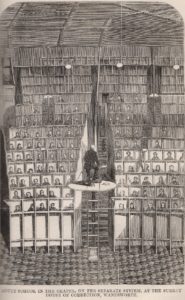 However, these chaplains also provided assurances that the truth was soon discovered. The more literate found rudimentary instruction in reading and writing tedious, or found they were denied reading materials that would provide respite in separate confinement. Reading and writing tests for new arrivals were also introduced to improve accuracy in assessments of previous education at least.

Moreover, as information collected in prison registers was increasingly required for the compilation of national criminal statistics, more attention was paid to information gathering at the institutional level. From 1835, prison inspectors checked systems of record-keeping during their visits, including methods used to complete the registers. For example, prison officials who did not actively test the literacy skills of new prisoners were berated by inspectors for the consequence of their laxity on the national statistics. Following their efforts, in 1838 prison inspectors began to express confidence in the reliability of personal data on accused and convicted criminals.

Still, we don’t need to take their word for it. We can, to some degree, test accuracy ourselves using repeat offender data in the registers. 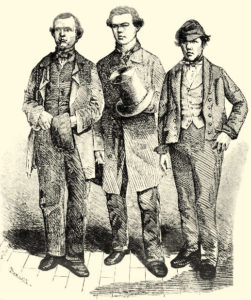 As recidivism was something that had long troubled prison officials, policy makers and social commentators, efforts were made in prison registers to capture previous offences of individuals in the prison registers. Granted, there were limits to what could be achieved. For example, it could be difficult or impossible for officials in one jurisdiction (county or borough) to discover the previous convictions of prisoners who had resided in another jurisdiction, unless the prisoner him/herself was willing to disclose them.

Most often prison registers containing details of former convictions simply provide a list of all earlier appearances in the same record, i.e. volume number and page. For an historian (family, local or social) wanting to test accuracy, this is incredibly useful information.

Repeat offender data can be used to see how often an individual’s personal information changed over time. A lot of change, for example, might suggest that information is unstable and unreliable.

This is what Fyson and Fenchel concluded when they studied the repeat offender data from a set of 19th century Canadian prison registers. Finding that information on the age, height marital status and literacy of prisoners often changed between convictions, these historians argued that personal data in prison registers was unreliable.

However, I would argue that a more nuanced approach is necessary, that identifies categories of information that should not change between convictions, such as a prisoner’s place of birth; accepts minor variations in subjective categories or those where estimates were more likely, for example, physical characteristics and age; and takes seriously changes in information such as marital status, residence, occupation, literacy and religion for what this might tell us about the contours of life within the labouring classes.

In other words, if you have a repeat offender in your family tree, and you happen to find them in a prison register, look for commonalities in multiple entries, but don’t be too dismissive personal data that changes. The register might be providing you with crucial information about their life history which would be almost impossible to find in other sources.

Thanks for reading. In my next and final post, I will show how data from prison registers can be used to expose new patters in the everyday lives of the labouring poor in 19th century England.

Donald Fyson and Francois Fenchel, ‘Prison registers, their possibilities and pitfalls: the case of local prisons in nineteenth-century Quebec’, History of the Family, 20 (2015), pp. 163-188.