At these three popular tourist sites in France, you might be surprised to stumble across some fascinating prison history. 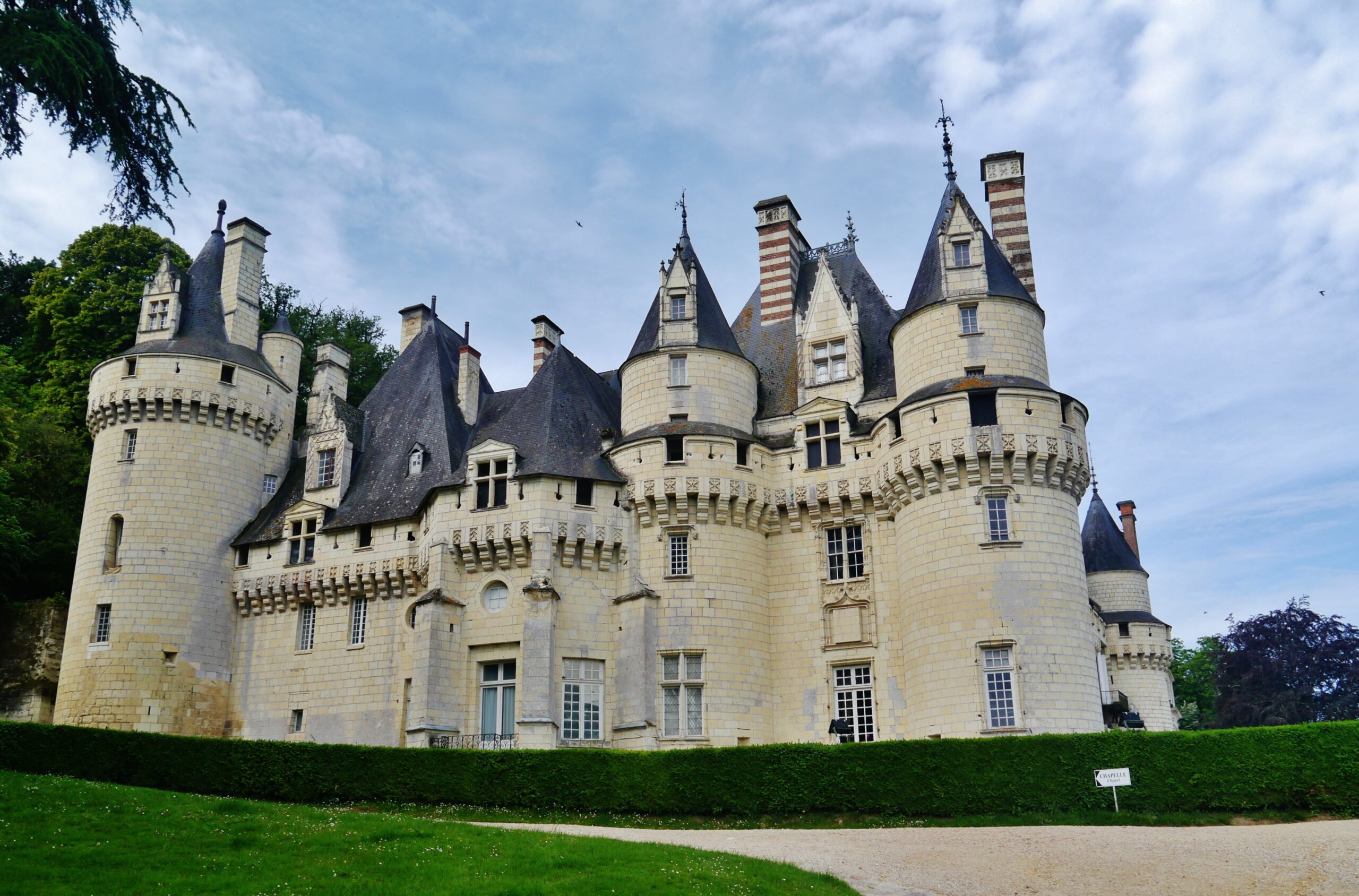 Nestled on a hill, overlooking the Indre River, is the splendid Château d’Ussé. Built in phases from the 11th to the 17th centuries, Château d’Ussé was the inspiration for Charles Perrault‘s famous and enduring fairy tale, Sleeping Beauty.

After visiting the beautifully furnished rooms of the château, visitors are treated to a series of tableaux in the towers which retell the story of Sleeping Beauty. It is extremely well done and great fun.

However, given its strategic position, size and age, this château would be incomplete without… a prison! 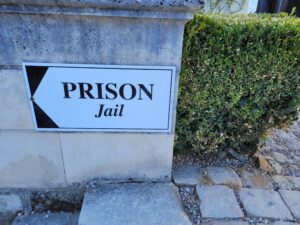 The door leading to a single cell is located in the old moat or ditch. 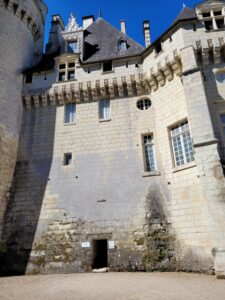 The internal stairs presumably kept the cell dry – or drier than it might otherwise have been. 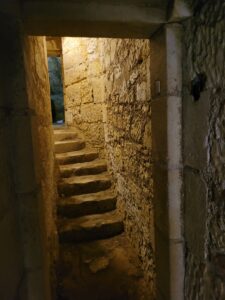 An opening in the castle wall provides a shaft of light, a reminder of the world outside. 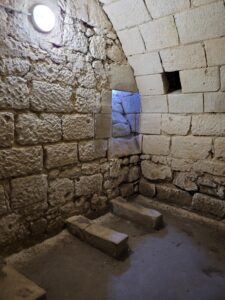 The walls bear the marks of modern visitors alongside those of some of its historic inhabitants. Yet for all intents and purposes, the latter are long forgotten. 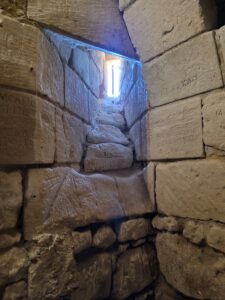 Light source for the cell. Graffiti, old and new, can be seen on either side of the shaft (© Rosalind Crone) 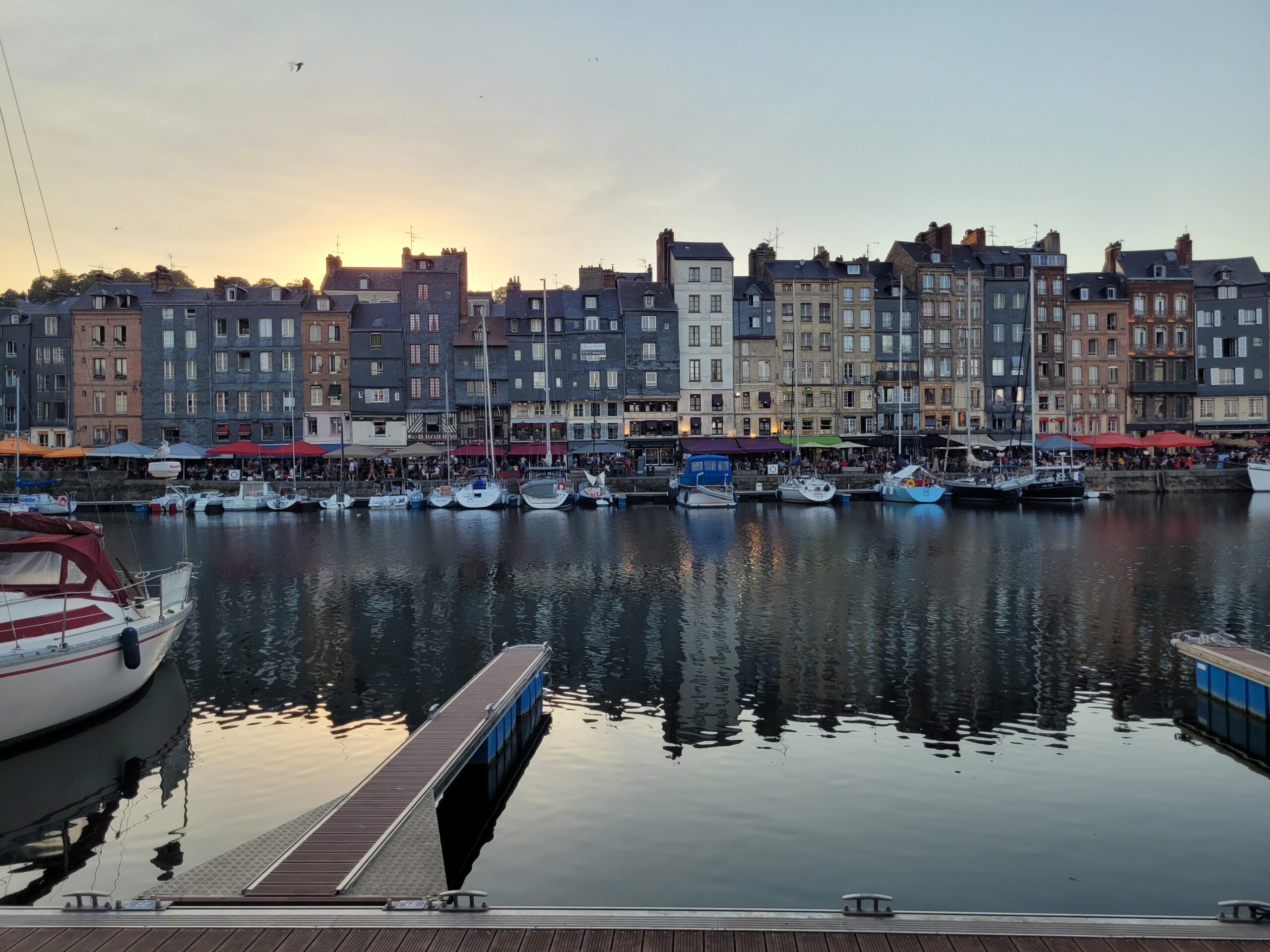 The pretty seaside town of Honfleur on the Normandy coast is one of the most popular tourist destinations in France. The town is best known for its stunning Vieux Bassin, or inner harbour, but there are many other historical and artistic attractions to see, and winding medieval streets to appreciate. 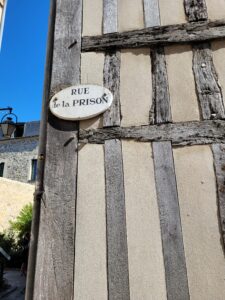 One of these streets is called Rue de la Prison, because this is where the prison for the Viscounty of Roncheville was located in the 17th century. 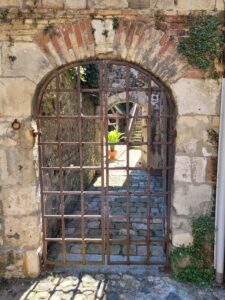 An old c.16th century house was converted into the prison. It could be accessed via a yard. 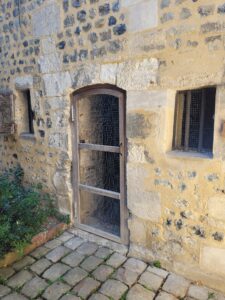 One of the punishment cells at Honfleur prison (© Rosalind Crone)

There were two cells in the yard that were used for the solitary confinement of prisoners who misbehaved while incarcerated. One of these cells is open to the public to view. 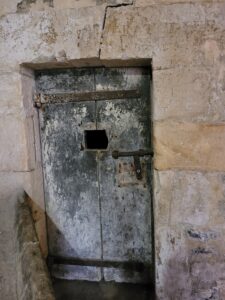 Inside are some shackles rom the former pillory previously sited in the town square for the public punishment of criminals & smugglers. 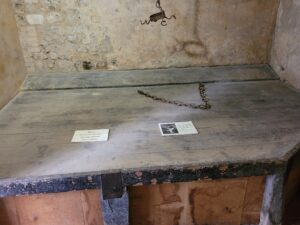 Inside one of the punishment cells at Honfleur Prison (© Rosalind Crone)

In the yard there is also a stone staircase which was used to access the upper part of the prison, called the ‘Pistole’. 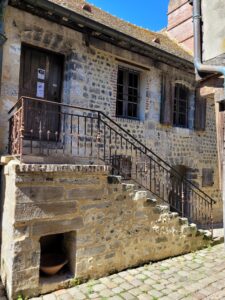 These days it leads into the Musée d’ethnographie, an exceptionally interesting collection of artefacts relating to life in Honfleur between the 16th & 19th centuries. It is definitely worth a visit! 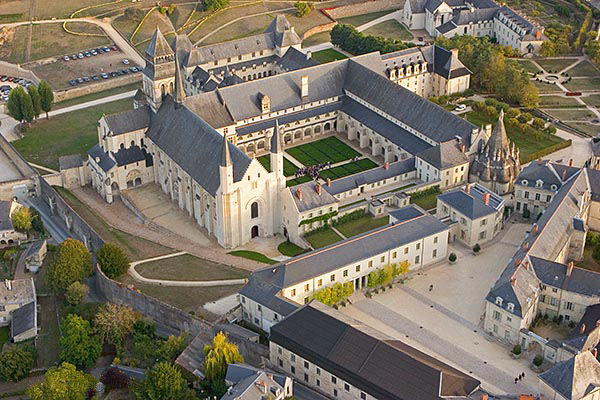 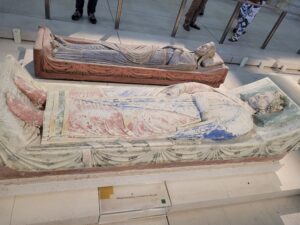 Richard I (Richard the Lion Heart) alongside Isabelle, wife of King John I (© Rosalind Crone)

Their remains were removed after the the Abbey’s closure in 1792, a consequence of the French Revolution. Another was the conversion of the site into a prison… 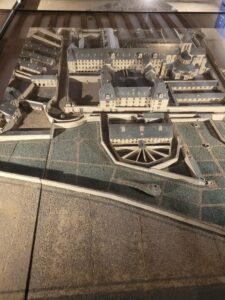 For 150 years, between 1814 & 1963, men, women & children were imprisoned at Fontevraud Penitentiary. Efforts were made to match new buildings with the old, & as the population increased space within the old Abbey was colonized & optimized for use. 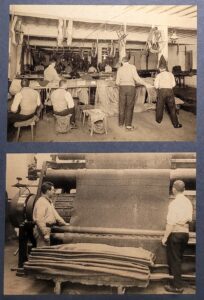 Prisoners were put to work on textile mills, silence was imposed in 1839, punishments included solitary confinement in the dungeon. Poor hygiene & violence between inmates meant mortality was high. Fontevraud was regarded as one of the harshest prisons in France. 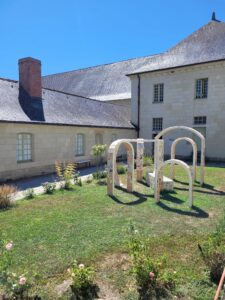 Ironically, the use of the Abbey as a prison saved it from total destruction. In the late 19thC, prison governors began restoration work. Their efforts were expanded after the closure of the prison. By end of the 20th century, physical evidence of the Abbey’s penal past had been removed. 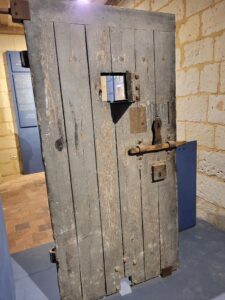 Despite this, visitors to the Abbey today are presented with an exceptional exhibition on Fontevraud Penitentiary, which includes many artefacts & photographs as well as valuable insights on prison life in Europe during the modern period. 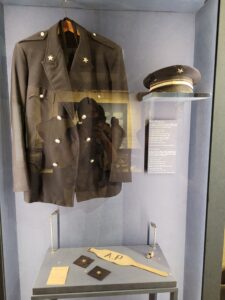 More information on each of these sites – and their history, location and opening times – can be found on the following websites: