Why are there so many bridewells?

In July 2021, Prison History project lead Rosalind Crone was interviewed by John Darvall from BBC Radio Bristol on the history and use of the term ‘bridewell’ after a listener sent in a question.

It was such a great question that we thought we should share Rosalind’s response. 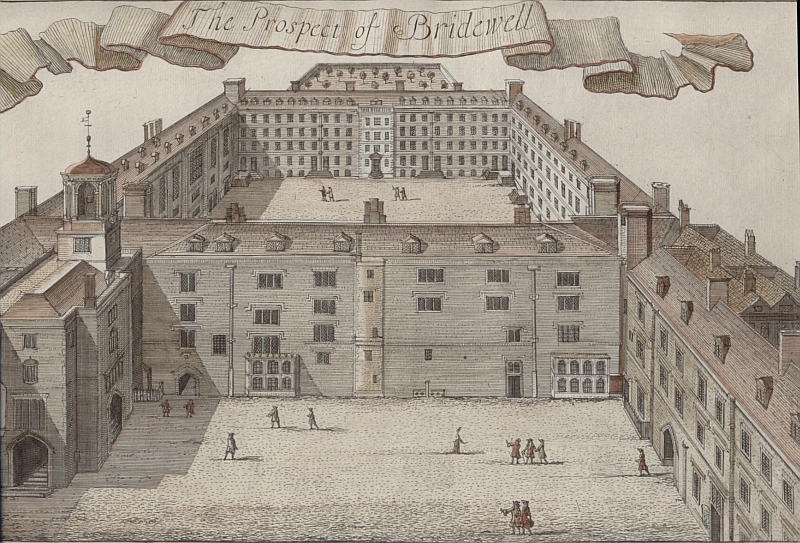 From John Strype’s, An Accurate Edition of Stow’s Survey of London (1720) (https://en.wikipedia.org/wiki/Bridewell_Palace#/media/File:Prospect_of_Bridewell.jpg)

Q: Bristol has its main police station – Bridewell – in the centre of the city. I’ve noticed other cities around the country also have a Bridewell station. I’d like to know why that name is used, and what is the history of it please?

Bridewell is an old term and it has been used a lot in connection with British (and Irish) criminal justice, often for different types of institutions. There are few clues in the name as to what it means! It’s a complicated story, so bear with me and I’ll try to explain.

Let’s go back to the beginning, to the very first building called ‘bridewell’. That was Bridewell Palace in London, built by Henry VIII in the 1510s, and so named because it stood near to a holy well which was dedicated to St Bride. It wasn’t used as a royal palace for long, and by 1550 it had become a bit run down. In 1553, Edward VI gave it to the City of London, and in 1556 the palace was converted into a hospital for needy and infirm paupers and a prison.

Now this was a special type of prison, established to address particular social problems that had emerged in London and other urban areas; namely vagrancy, begging, disorderly women, disobedient servants and idle apprentices. The idea was that these men, women and children would be imprisoned in Bridewell for a short period of time and taught to work. In other words, they could be reformed, or transformed into productive members of society. The Bridewell was, then, a house of correction, addressing and blending the problems of poverty and crime.

The idea soon caught on. Other local authorities – both towns and counties – began to establish bridewells or houses of correction. Perhaps 170 existed by the 1700s. And they were used to incarcerate an increasing number of petty offenders and even some people convicted of more serious crimes who had been given sentences of imprisonment in lieu of transportation. So the bridewell was an evolving institution which played a part in the rise of the the use of imprisonment for convicted criminals during the 18th and 19th centuries.

However, during the late 18th century and 19th century, things get complicated. First, there was the amalgamation of gaols (primarily used to hold prisoners on remand) and bridewells (or houses of correction). They began to share some functions, and they often became part of one institution (for example a county gaol and house of correction, on the same site, sometimes in the same building, and under the same management, rather than two separate institutions). In 1865, the distinction between the gaol and the bridewell was officially abolished and these types of local prison were just called local prison.

Second, from about the 1830s there was a steady decline in the number of prisons that existed in England (and in Britain more widely). Inefficient or expensive prisons were closed down. This meant a decline in the number of bridewells (of houses of correction) too – some of which were converted into police stations with the establishment of new county and borough police forces following new police legislation. This might be why some police stations have the name ‘bridewell’ attached to them.

More curious is the use of the name ‘bridewell’ for police stations in Liverpool – the term bridewell is used here for a police station which has cells attached. These police stations had never been bridewells or houses of correction, nor are they located on streets called ‘Bridewell Street’. So it is really confusing!

I have also seen some village lock-ups – single or two-cell brick or stone lock-ups, not attached to police stations – with ‘bridewell’ or ‘house of correction’ engraved on the exterior (for example, Hawarden in North Wales) . Again – these were not bridewells or houses of correction in the traditional sense, because, like the Liverpool police stations, they were used to hold accused criminals in the period between capture or arrest and being put before the magistrate; not for sentences of imprisonment. However, sometimes lock-ups were used as a type of community punishment – petty criminals or disorderly members of the community might be put into the lock-up for a night as a warning and let out the next day. So perhaps a type of ‘house of correction’ in the community perhaps?