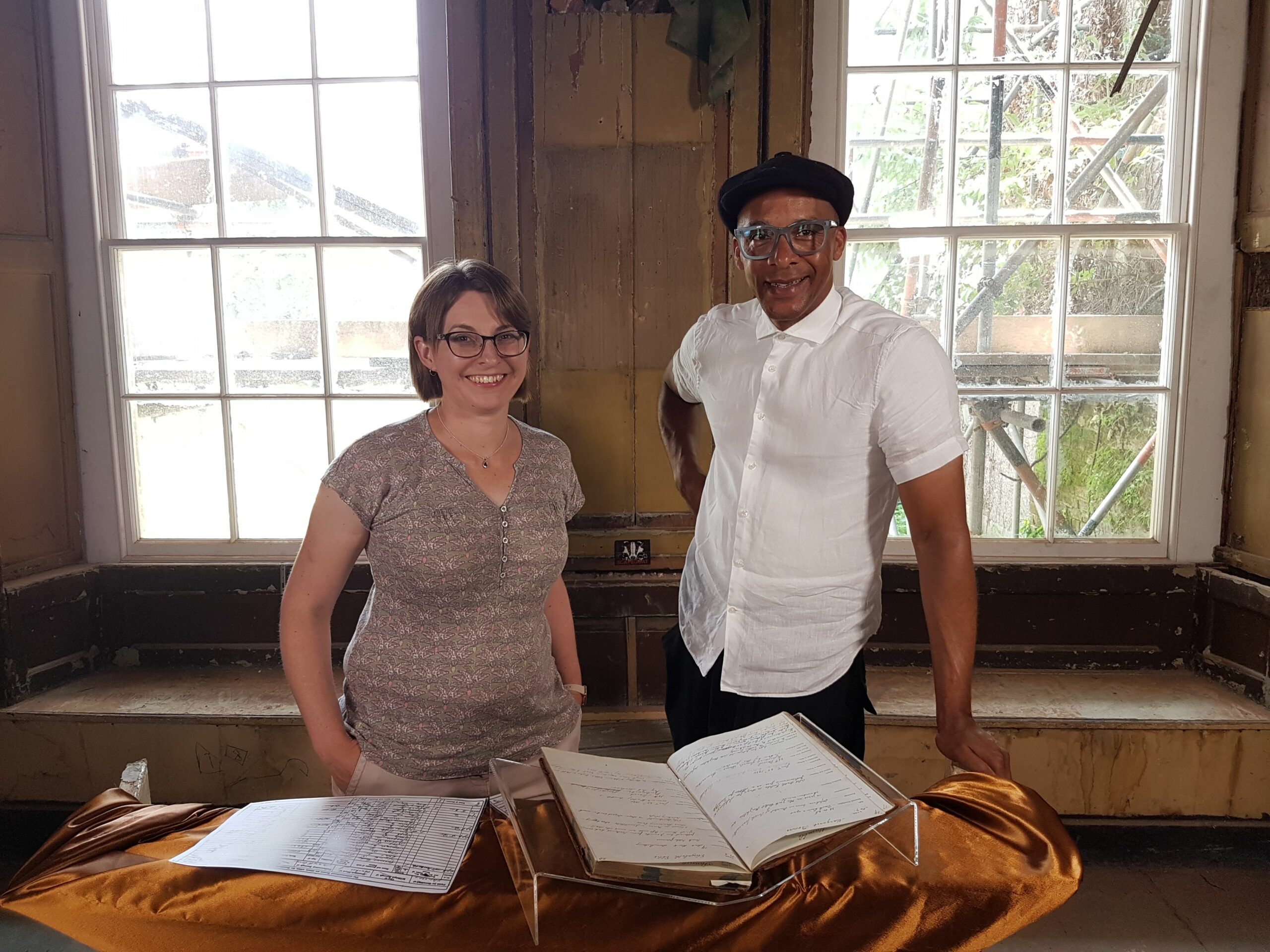 Jay had no idea that the building had such an important history. When he was living in Hackney 195 Mare Street was occupied by squatters and was famous locally for its rave parties. On the day of filming in July 2021, 195 Mare Street was a building site, in the process of being developed into luxury flats. However, a small plaque attached to the boundary wall provides clues to its past. 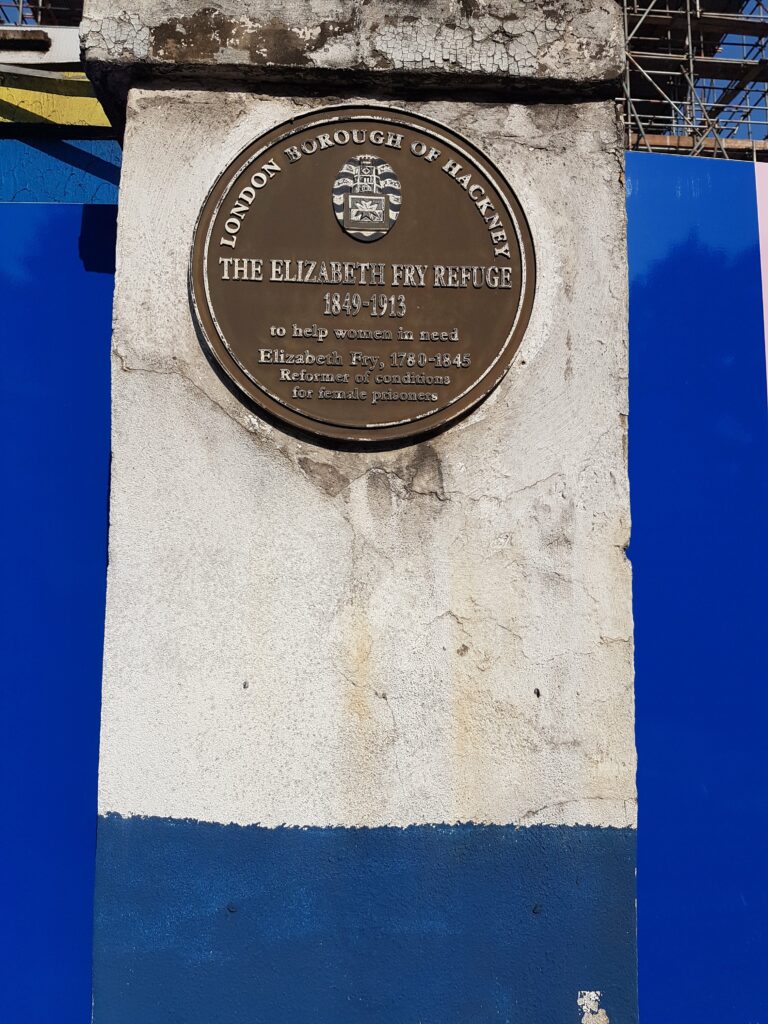 Who was Elizabeth Fry?

Elizabeth Fry was a famous penal reformer of the early 19th century. Born at Earlham, Norfolk, Elizabeth moved to London after her marriage to fellow Quaker Joseph Fry, first residing at St Mildred’s Court, City, before relocating to Plashet House in East Ham. Elizabeth became involved in all kinds of charitable work, and in 1813 was persuaded by a Quaker missionary, Stephen Grellet, to visit the poor women imprisoned in London’s Newgate Gaol. 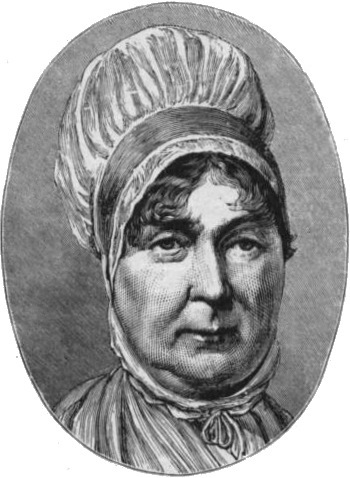 Elizabeth was shocked at the conditions she witnessed in the prison. Three years later, in 1816, Elizabeth returned and embarked upon a radical plan to improve the lives of the female prisoners, both inside and outside prison. She devised a new regime based on: superintendence (the supervision of female prisoners by female officers and lady-visitors); occupation (the provision of productive activities, which ideally would give women skills to gain employment after release); and instruction (primarily religious but also in reading and writing). Fry’s regime was regarded as a success, and her ideas informed the reform of female imprisonment across Britain and abroad.

At the same time, Elizabeth established a Newgate Ladies Association, the aim of which was to provide lady visitors to keep watch over the regime in the prison, to read the Bible to the prisoners, and to assist with reintegrating released female prisoners back into society, for example, by finding them employment (which was often in domestic service). Inspired by Fry’s example, other ladies prison visiting societies soon appeared, and in 1821 Elizabeth founded an umbrella organisation, the British Ladies Society for Promoting the Reformation of Female Prisoners, to coordinate their activities. 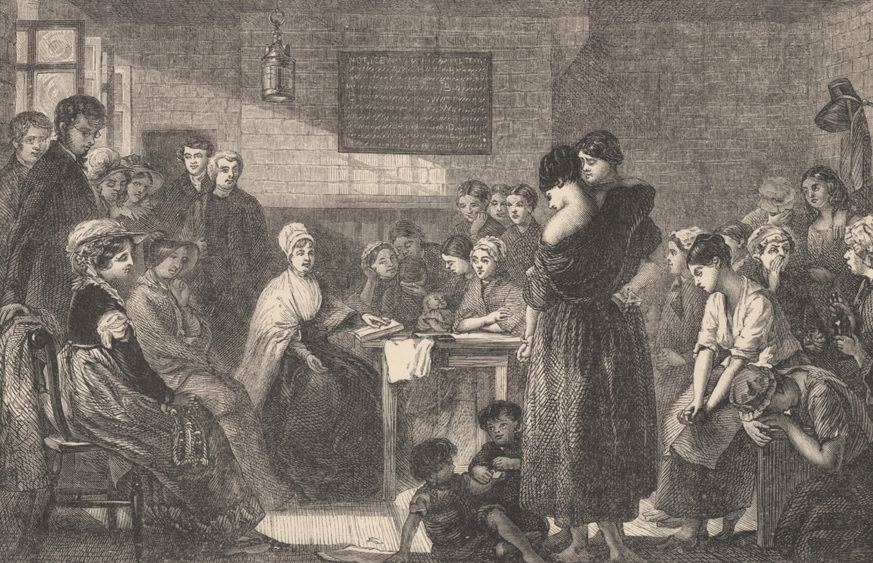 Mrs Fry reading to the prisoners at Newgate in 1816 by Jerry Barrett (Source: https://commons.wikimedia.org/wiki/File:Mrs._Fry_reading_to_the_prisoners_in_Newgate_John_Johnson.jpg)

By the time of her death in 1845, Elizabeth Fry had become very well known, in Britain and abroad, and included among her acquaintance members of the nobility and royal families of Europe. There was a feeling, then, that something should be done to commemorate her life and achievements.

At a meeting at Mansion House, London, in June 1846, it was suggested that a refuge which would provide temporary lodgings and food for destitute women released from London’s prisons might be established in Fry’s name. Funds were donated (including by Queen Victoria, the King of Prussia and the Queen of France), and premises at 195 Mare Street were obtained. The British Ladies Society was invited to manage the refuge which opened its doors in 1849.

Statue of Elizabeth Fry at the Old Bailey, London; another memorial commemorating her philanthropic work in prisons

Life in the Elizabeth Fry Refuge

For women released from prison in London who had no family or friends to support them, the refuge provided a shelter and food while they searched for employment and made the first steps towards rebuilding their lives. Domestic skills, such as washing and sewing, were practised within the refuge to ensure women had the right skills to get jobs. The aim was to secure them positions in domestic service or in other kinds of menial work – the women were to be returned to their ‘proper place’ in society; alternative futures and opportunities were not encouraged.

There was also an overwhelming focus on the moral rehabilitation of women, through evangelisation or religious instruction. Making such women into good Christian subjects was regarded as the best means to prevent any relapse into crime. 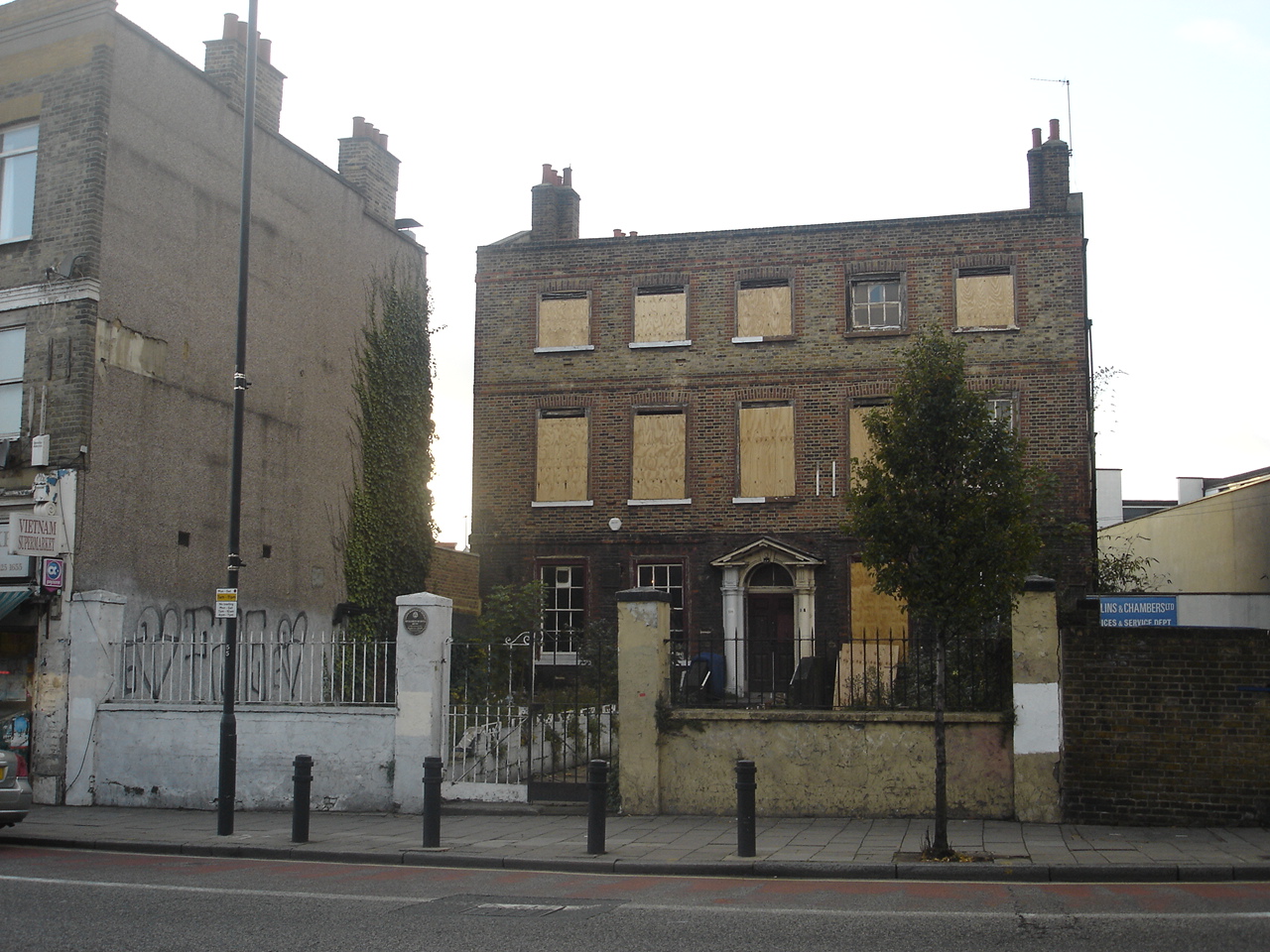 However, such religious indoctrination could descend into brow beating and often did not align with the practical realities of the women’s lives. How were the women to make practical use of their religious instruction? The women in the refuge were also subject to strict surveillance, and as the conditions in the refuge mirrored those in prisons and workhouses, the refuge could be regarded as an extension of their punishment for committing crime and being poor.

Despite this, active steps were taken by refuge staff to secure more meaningful futures for their charges. Employment was secured for many women and under fairly favourable conditions. Prospective employers were told of the crimes that the women had committed; however, a commitment was made by employers never to mention a woman’s criminal past again if she remained with them for more than one year. Refuge staff did reunite some women with their families, and by re-establishing these important networks increased the chances for successful rehabilitation.

Using a surviving case book from the refuge, as well as other historical documents, Rosalind and Jay pieced together some of the stories of women who took shelter at 195 Mare Street. 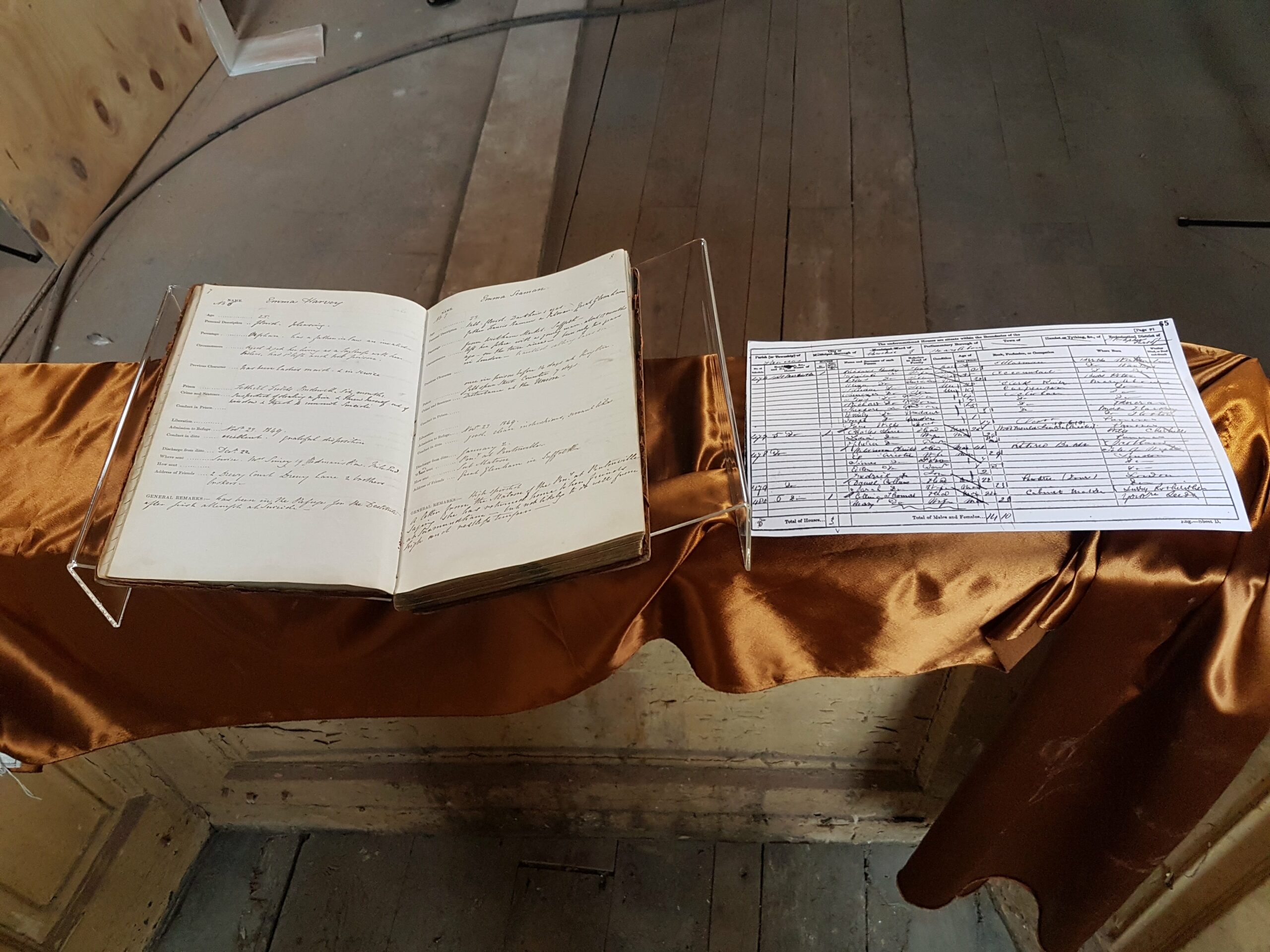 The original case book from the Refuge (now at Hackney Archives) together with a page from the Census. (©Rosalind Crone)

The Elizabeth Fry Refuge at 195 Mare Street closed in 1913, and the building was subsequently taken over by a working man’s club called the Landsdowne Club. Later in the 20th century the building was abandoned and the squatters moved in.

Elizabeth Fry’s legacy lives on. In 1925 the Elizabeth Fry Charity continued the work of the refuge, providing a hostel for women on probation. In 1962, the Charity moved to Reading where it continues to provide vital support for women in need.