In Summer 2021, we learned of the existence of a map of Hertfordshire lock-ups, cages and prisons.

It’s creator, David Short, kindly offered to share it with us, along with the chapter that accompanied it, written by Philip Plumb, and published in David Short’s An Historical Atlas of Hertfordshire (Hatfield, 2011). 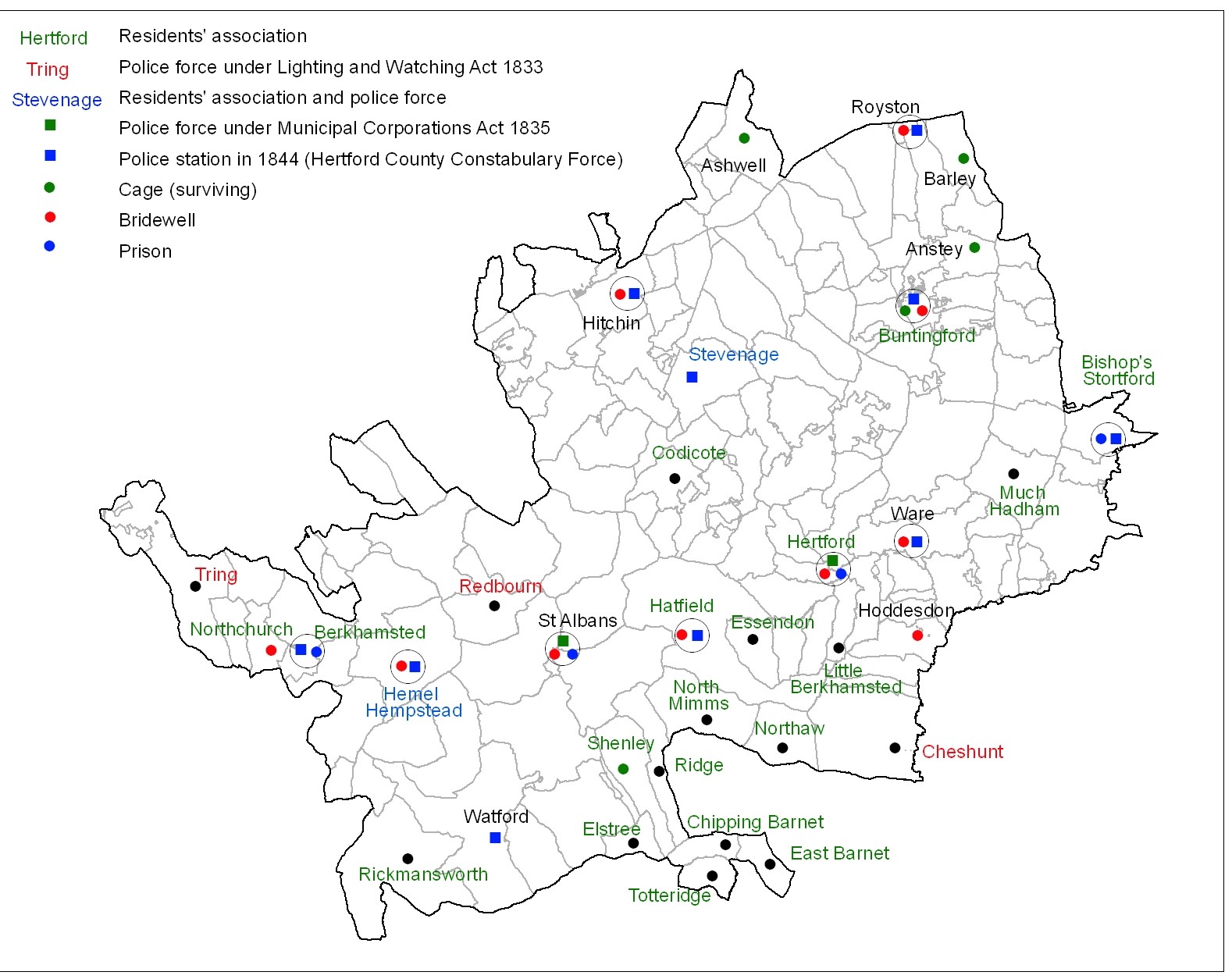 From the earliest times the control of crime has been a necessity for the stability of society and was the responsibility of the state, the church and local communities. Prior to the Norman Conquest the local courts were those of the shire, the borough and the hundred with the former as the county’s governing body: thus Hertford has always been the seat of justice holding the Assizes and other important courts. St Albans, because of the special status of the Liberty, played that role for its surrounding parishes.  During the middle ages manorial and honour courts became important.

Prisons had a different role in medieval times from that of today. They held prisoners pending trial and sentence, which was usually brutal and definitive, not leading to terms of imprisonment. As well as lay prisoners, clergymen accused by the civil authorities of criminal activities were imprisoned in Hertford Castle. The Borough Gaol in Back Street was built before 1591 and was replaced by the Fore Street Gaol when it became dilapidated in 1702. This soon became an unhealthy building which, in a very few years, caused the death of seven or eight prisoners and two turnkeys. It was replaced by the Ware Road Gaol, away from the centre of town and was operating by the time of John Howard the prison reformer made a visit in 1783. 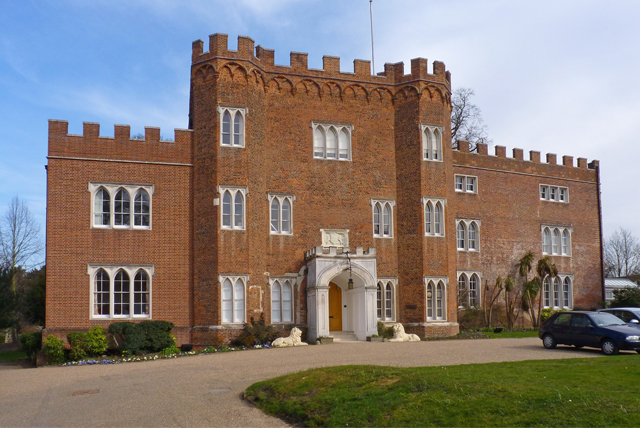 The prison of the Bishops of London was in Stortford castle, which incarcerated criminous clerks from all parts of the diocese. Part of the gatehouse of St Albans Abbey functioned as the Liberty gaol while the St Albans Town Hall housed the Borough Gaol. Berkhamstead Castle, when the home of the Black Prince, was the prison of the captured John, King of France.

Each manor and later parish had its constable, appointed annually, without regular payment except by results such as sum received for each prisoner brought to the court of quarter sessions. Above him was the chief or high constable of the hundred who was responsible to the county’s Justices of the Peace, sitting in Petty or Quarter Sessions. More serious crimes were brought before the Assizes held before two or more High Court judges who travelled on a circuit between major towns.

In Tudor times the provost-marshall, military in origin, had his duties extended to the civilian population to clear the county of rogues, vagrants and maimed soldiers. With his assistants, well armed, well mounted and well paid, these posses were more effective at apprehending criminals  than the local constables. In 1622, John Curtys of Ashwell, was appointed marshall at a wage of 100 marks yearly, a handsome salary.

Named after the London Bridewell set up for the able-bodied poor, boroughs and counties established their own bridewells or houses of correction. Originally intended to provide work and training for the unemployed for which a stock of appropriate work materials would be held, they gradually became more of a penal institution, holding prisoners for trial and administering whippings and other punishments. In 1598 Hertfordshire had eight, one for each hundred, at Hoddesdon; Ware; Buntingford; Royston; Hitchin; Hatfield; St Albans, and Hemel Hempstead. In 1624 the judges at the March Assizes grumbled that no other county had more than two and that in Hertfordshire two, well-governed and appointed, would be beneficial. By 1773 when John Howard, made the first of several visits, there were still five: Hertford (in the same building as the gaol), Hitchin, Berkhamsted, Buntingford and St Albans. They were all closed in 1842, the Buntingford building surviving until today. 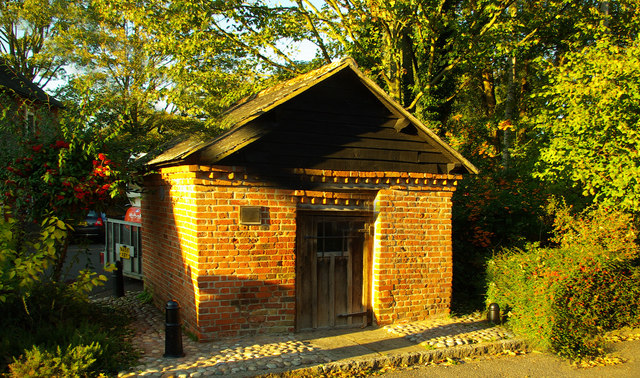 Each community had a secure room or building known as a lock-up or cage where miscreants could be held for a short time until brought to trial, or until sober enough to be of no danger. Many cages disappeared when police cells took their place but five can still be seen in the county. These are Anstey: where part of the parish church lychgate was converted for this purpose in the 19th century; Ashwell, a small square building constructed of clunch about 1800; Barley, a timber cage built in the late 17th century; Buntingford, a brick, 18th century, rectangular building close by the Bridewell and Shenley, a domed, circular, rendered brick building, also of the 18th century.

The old parish constable system was completely inadequate to cope with the great increase in rural crime by the late 18th and early 19th centuries and wealthier residents in many communities in Hertfordshire formed associations to pay men, usually ex-soldiers, to patrol the towns and villages and protect property.

The success of the Metropolitan Police under the 1829 Act was observed with great interest. The Chadwick Report of 1839 (investigating the best means of establishing an efficient rural police force) gave many examples of crime problems in Hertfordshire and elsewhere. After much opposition to the concept, the county magistrates set up the Hertford County Constabulary Force in April 1841 under the Act of 1839. Police stations were established in Bishop’s Stortford, Great. Berkhamsted, Hatfield, Hitchin, Buntingford, Ware, Stevenage, Royston, Hemel Hempstead and Watford under the Chief Constable, Captain Archibald Robertson, based at Hertford. There were also Borough Forces at Hertford and St Albans set up in 1836 under the Municipal Corporations Act of 1835. Cheshunt, Hemel Hempstead, Redbourn, Stevenage and Tring used the Lighting and Watching Act of 1833 to set up official police forces.

Many thanks to David Short for permission to reproduce his map and Philip Plumb’s chapter on ‘Lock-ups, Cages and Prisons’ from David Short, An Historical Atlas of Hertfordshire (Hatfield, 2011).