Situated on Church Hill, the Freshford Lock-up is one of the most unpretentious lock-ups in our database.

So much so, that a village resident whom we encountered when filming Freshford Lock-up had no idea about its past use.

Venture into the mysterious Freshford lock-up and see how it looks today. Watch the footage of Rosalind exploring this lock-up-turned-fire-engine-house, and join her to gain a deeper understanding of the place… 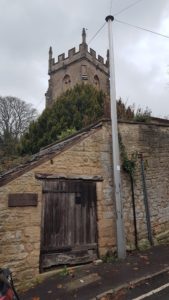 It was built of rubble and stone in the late 18th century. Connected to an existing wall which surrounds the churchyard, and, because of the steepness of the hill on which it sits, the interior extends back into the churchyard. In other words, Freshford lock-up is partially underground.

It is impossible to tell if the door is original. It does have a small, cast iron grille covering a window, which suggests it might well be. At least, this grille is a good indication of its former use. 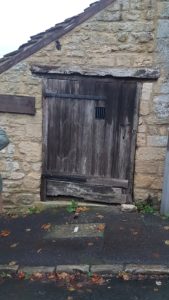 Inside is one cell. 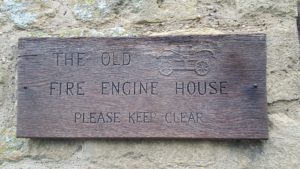 Wooden plaque, to the left of the door of the lock-up (© Rosalind Crone)