How to get more out of prison registers

In this first post, Rosalind will explain how a simple system to record who was incarcerated in a given prison evolved into a national project to capture personal information on tens of thousands of ordinary individuals.

Prison registers are my favourite class of nominal record. Introduced as a way of recording precisely who was resident in a prison and who had been discharged, they belong to the history of record-keeping in the modern state institution. Their expansion from the turn of the 19th century to include an increasing amount of information about the lives of individuals makes them an incredibly valuable source for social historians, local historians, and especially family historians.

Discovering a criminal ancestor can be a bonus: many prison registers will provide great detail on their encounter with the law, their family life; and even their physical appearance. If you’re very lucky, you’ll find a photograph of them too.

But why and how did this tremendous expansion of personal information in prison registers happen? And what were the consequences?

18th-century prison registers were, on the whole, rather basic affairs. They were invented and used to keep track of who was incarcerated in a given prison at a particular moment. And so they comprised a list of names, alongside which were given the dates of the incarceration and release of individuals, and perhaps details of the crimes committed and, if convicted, sentence inflicted. There was very little, if any, other personal information collected in their pages.

At the very end of the 18th century, however, this changed. From c.1780, there was a growing interest in the lives of criminals evident in the expansion of personal information in existing criminal records, and in the development of new criminal records. This expansion arguably began at the local or institutional level, but quickly found proponents at the national level, i.e. clerks in the Home Office and other government departments who collated local data and invented new schemes.

The development of national criminal statistics

Criminal Registers, for example, lists of persons charged with indictable offences which also included personal information, first began as a Middlesex and London initiative in 1791, were quickly taken over by the Home Office in 1794, and expanded to cover the rest of England and Wales in 1805. Similarly, the emergence and development of national criminal statistics put new responsibilities on local officials to collect certain types of information. 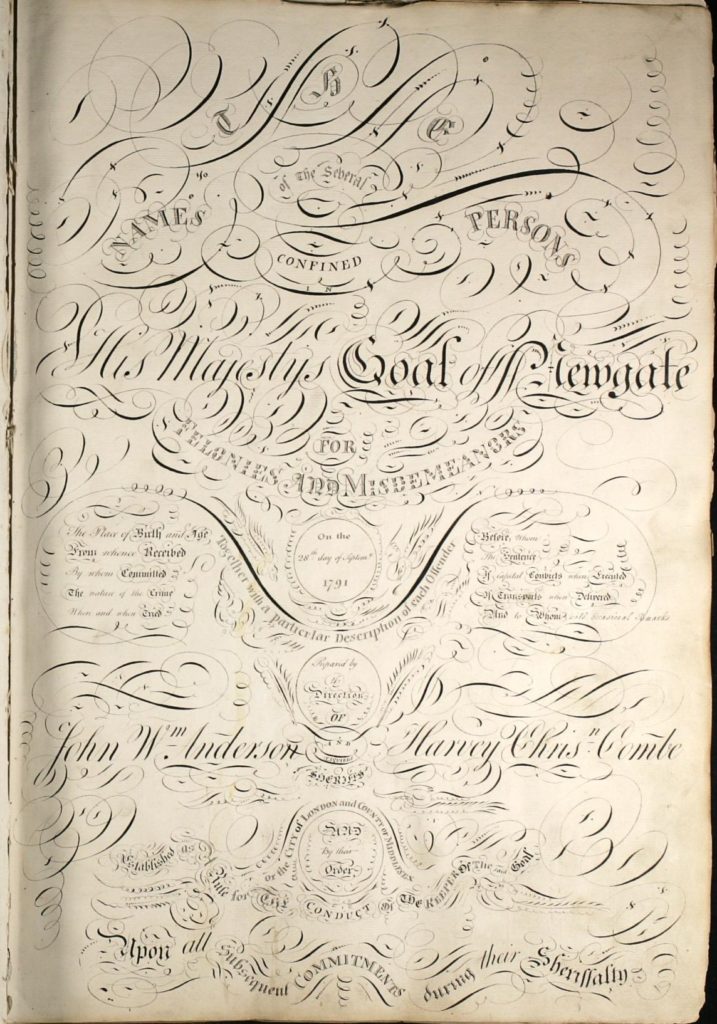 The elaborate front page of the first Criminal Register, 1791. Which promises information on criminals’ birthplaces and ages, ‘together with a particular description of each offender’. The National Archives, HO26/1 (with kind permission)

Historians have long debated the reasons for this new interest in the lives of criminals. Some have argued that such detailed nominal records were used to facilitate the expansion of state control over individuals. These scholars suggest, for example, that the physical descriptions of criminals, as well as information on residences and families, could be used by new policing agencies to monitor released prisoners.

Others have pointed to a growing desire among magistrates and penal officials, who often gave the orders for the collection of information, to better understand ‘the criminal’ and the causes of crime. In other words, the expansion of criminal records at the turn of the 19th century can be regarded as the birth of criminology.

Though it is important to remember that some categories of information collected, especially in prison records, served a functional purpose, at least initially. Take, for example, the collection of data on literacy in prison records, which, until 1835, often coincided with the establishment of a school to teach reading and writing to prisoners within the institution. After that date, records of prisoner literacy were mandated by the state.

Prison registers were a convenient place to store this new information. Some late 18th and early 19th century registers show how penal officials tried to squeeze the new information into existing layouts, by drawing new, headed columns in the margins or by cramming additional details into old columns.

In 1828, the clerk at Bodmin Prison hand-ruled a new column to collect information on prisoners’ literacy. At Dorchester Prison in the early 1830s, information on literacy was placed in a column which was supposed to record previous incarcerations. At many other prisons, abbreviations for literacy – R, W, imp – were scratched next to prisoners’ names – you need to look closely to find them!

As I explained in my Masterclass on Prison Registers in Who Do You Think You Are Magazine, some officials found it impossible to record all the new personal information they wanted or needed to in the prison registers, and so invented new types of nominal record to cope with the overspill. Several prisons in Somerset, for example, included ages and occupations in prison registers but used description books for other personal information.

The continuing expansion of personal information also led to new initiatives in prison register design. List-style registers, standard at the turn of the 19th century, were replaced, in some prisons, with new ‘form-style’ registers – ledgers in which personal information about an individual prisoner was spread across an entire page. Registers used by the two county gaols in Suffolk are a good example of the ‘form-style’ register. By using a whole page, officials were able to collect additional information on where a prisoner went to school, whether he served in the armed forces, his or her father’s name and residence, and the means of subsistence for his or her dependants.

It is worth pointing out that the Suffolk registers were not unique. The registers in use at Knutsford County House of Correction were almost identical. In 1839, the prison inspectors reproduced a page from the Knutsford registers in their annual report as an example of good practice in record-keeping. It is possible that the officials at Suffolk replicated the example; it is more likely though that they purchased their ready-made registers from the same printer!

By the 1840s, there were several specialist printers who were creating and selling stock prison registers for use in local prisons. Both their business and the expansion of information in registers was aided by falling costs of paper manufacture and developments in printing technology in the early decades of the 19th century.

One such printer was Shaw & Sons in London, who handled a substantial amount of government business. They offered form-style registers, but also a design which sat between the list and the form – a ‘mini form’, one for each prisoner, several of which could be stacked on a single page of the register.

While registers for local prisons continued to expand, the information in convict prison registers remained much more tightly controlled and consistent across institutions. My Masterclass on Prison Registers referred to two sets of convict prison registers: one maintained by the Home Office (found in HO8 and HO24 at The National Archives), and the other set used by the institution (and in PCOM2 at The National Archives).

All convict prison registers were list-style registers – with a list of names organized down the page and personal information about each individual stored in columns reading across the page. Those kept by the Home Office were identical for each prison, whereas those kept by institutions varied slightly in the amount of personal information collected about individuals.

For example, Pentonville registers from the early 1850s (PCOM2/64) included physical descriptions, weights and heights, whereas those kept at Millbank at the same time did not (PCOM2/32). 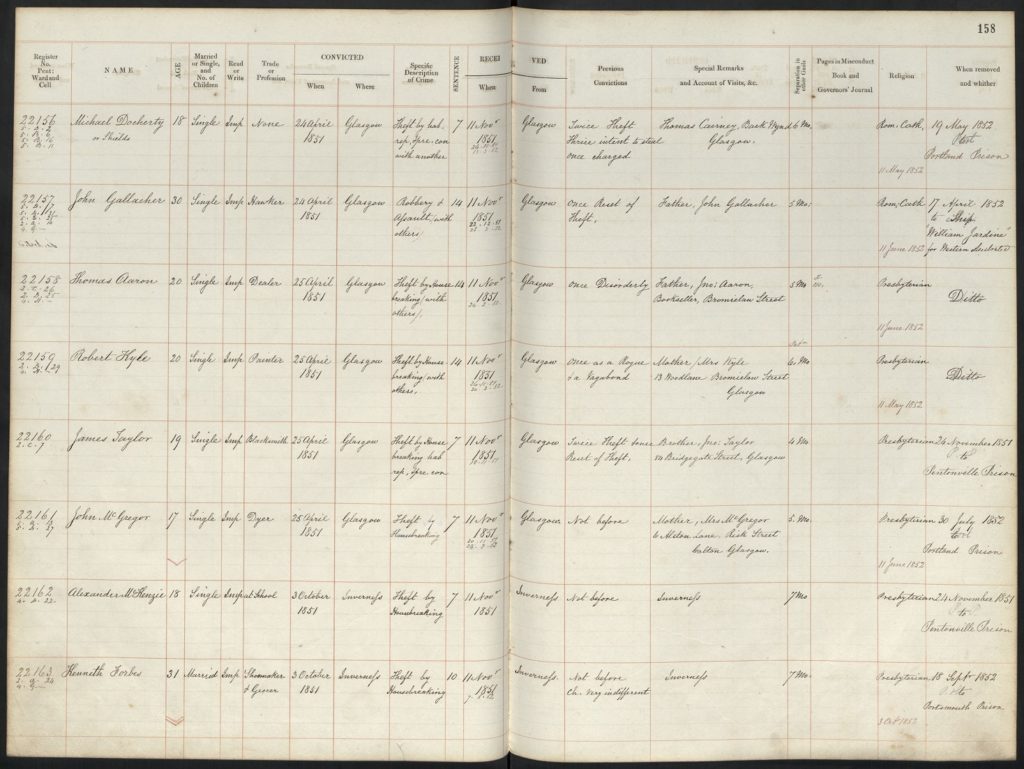 To summarise, local prison registers often contained much more detail than convict prison registers. If you have a convict in your family tree, it is worth your while tracing them back to the local prison in which they began their incarceration journey. If the registers survive for that prison, you may be rewarded with additional, and useful, information on their life and family.

The centralisation of local prisons in 1878 put an end to the great expansion of personal information on criminals in prison registers. The new Prison Commission introduced standard registers in all local prisons in England and Wales which mirrored those in use in convict prisons and limited the collection of personal details to prisoners’ education, age, height, hair colour, occupation, religion and birthplace. I say limited, but still, that is not a bad list for the historian! Moreover, in an ironic twist, these new registers were now printed by convicts working as compositors at prisons such as Millbank!

I hope that summary of the evolution of the prison register was useful. Next time, I will look at how prison registers can be used to study life histories.

For more on the expansion of personal information in criminal records, see:

Edward Higgs, The Information State in England: The Central Collection of Information on Citizens since 1500 (Palgrave Macmillan, 2004).

If so, we’d love to hear about it. Tell us Your Story, give us feedback, or get in touch.

Are you finding our posts on using prison records useful? Do you want more of this type of content? Is there anything, in particular, you’d like us to cover in these guides? Please let us know, by completing our survey, or by getting in touch.