In episode four of series 16 of Who Do You Think You Are?, I met up with Kate Winslet at Dartmoor Prison to help her understand the life and experiences of her three-times great-grandfather, William Colquhoun, who was employed as a Principal Warder there.

While at Dartmoor Prison, I took a little walk around Princetown to explore further the history of the town and its connection with the prison.

Princetown and prisoners of war

Princetown essentially came into being because of the prison. In the closing years of the 18th century Sir Thomas Tyrwhitt, Secretary to the Prince of Wales, obtained a grant from the Prince of 2,500 acres of land from the Duchy of Cornwall estate on Dartmoor. 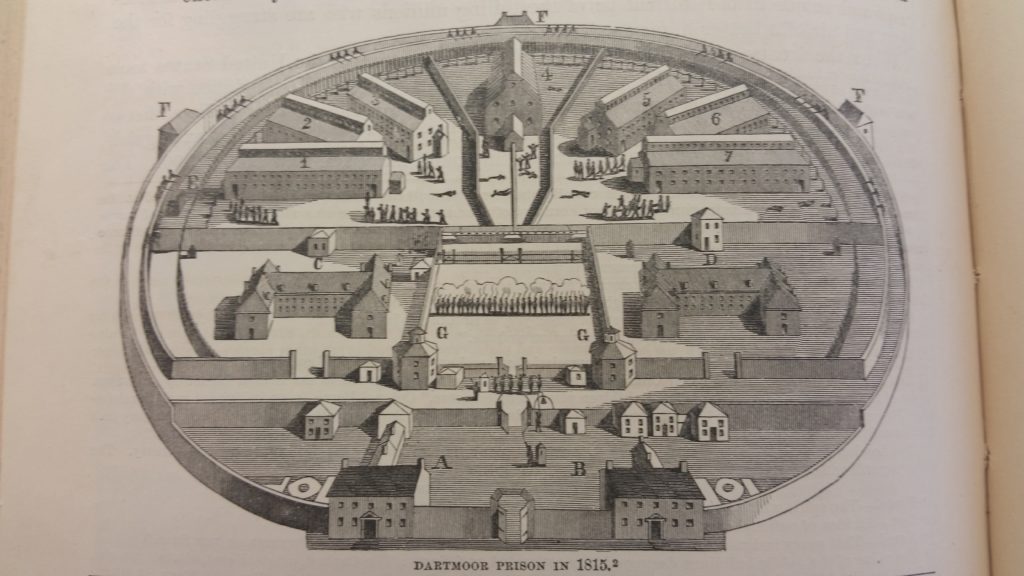 Tyrwhitt built a house for himself at Tor Royal and began to cultivate the land. It was at Tyrwhitt’s suggestion that a prison was built between 1806 and 1809 to accommodate increasing numbers of prisoners captured in the war with Napoleonic France and who were being held in unhealthy hulks at ports such as Plymouth.

Between 1809 and 1816, between 5,000 and 10,000 American and French prisoners of war were confined in the prison at any one time, guarded by between 300 and 500 soldiers accommodated in nearby barracks. A settlement grew adjacent to the prison to accommodate the needs of the prisoners and staff. Two large inns were established, including the Duchy Hotel, which was later used by Prince Albert when visiting the moors and is now used as the National Park Visitor Centre. Tradespeople moved in; bakehouses, slaughterhouses and a brewery were opened. A chapel was built in 1813 by the prisoners for the pastoral needs of those in the town. 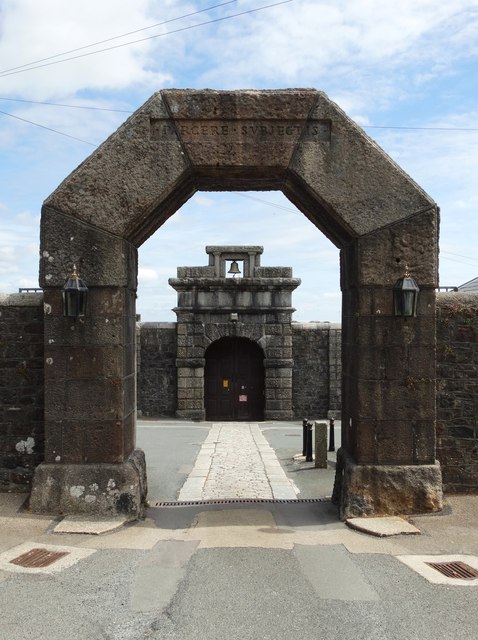 The distinctive iron and granite gate at the entrance to Dartmoor Prison, built by the prisoners of war. The inscription on the keystone reads, ‘Parcere Subjectis’, meaning ‘Spare the Vanquished’ (Photo © Neil Theasby (cc-by-sa/2.0)

However, peace with France brought such industry and expansion to an abrupt end. In 1816, the prisoners were released and the prison closed. Many dwellings in the neighbourhood were abandoned. The construction of a railway for transporting goods – granite to Plymouth and lime, manure and coal to the moors for land reclamation and domestic use – led to the re-occupation of some empty houses and businesses. But it was only with the re-establishment of the prison that Princetown once again began to grow into an important moorland town.

The decline of transportation and the rise of Dartmoor

Although by the late 1840s, the old prison on Dartmoor had fallen into a dilapidated state, it still looked like a good prospect for the Surveyor-General of Prisons, Sir Joshua Jebb, who was grappling with a crisis in the convict penal system.

Despite its continued popularity among British policymakers, transportation had fallen into decline as the Australian penal colonies began to close their doors to convicted criminals from the home country. Increasing numbers of convicts needed to be accommodated in Britain to await eventual transportation or release back into British society. At the same time, the use of hulks to hold male convicts sentenced to transportation was recognised as entirely unacceptable. New prisons onshore were required for the accommodation of these men. 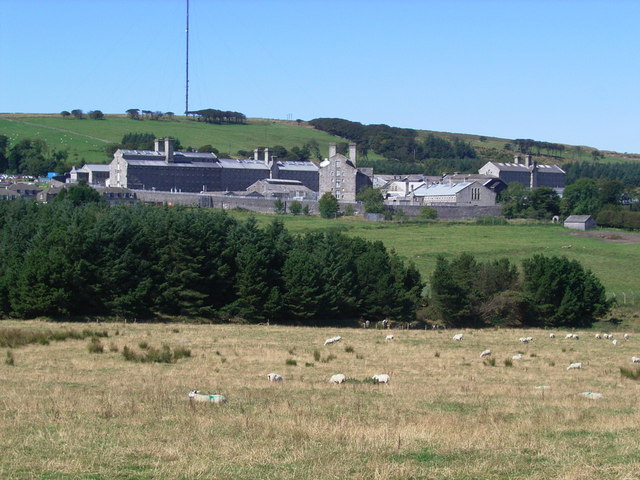 Dartmoor Prison – view from the north, looking back towards the prison (Photo © Lynda Poulter (cc-by-sa/2.0)

Dartmoor Prison was therefore brought back into use in November 1850 as one of two public works prisons (the other was at Portland, and several more opened subsequently): for those men sentenced to transportation who had served a period of separate confinement (up to nine months) at Millbank or Pentonville, and were in need of continued accommodation in Britain, either because they were waiting for space on ships bound for Western Australia, or because they were too unhealthy to undertake the voyage.

From 1853, public works prisons also received men sentenced to penal servitude in Britain, an alternative and later a replacement sanction for transportation.

Public works prisons had a reformative, as well as a punitive, function in the criminal justice system. Whereas separate confinement at Millbank and Pentonville was meant to encourage the reformation of a convict’s character, the supervised association at public works was meant to test the ability of the reformed convict once again to mix with his peers. Labour was hard but productive as it contributed to a public project, in the case of Dartmoor, the reclamation of moorland and its cultivation. Industrial training was available to some prisoners, and until the early 1860s, all convicts at public works prisons received half a day of schooling each week.

In its early years, Dartmoor was singled out for the reception of invalid convicts. Many were unable to labour outdoors on the land and so had to be assigned indoor work, making clothes and boots for the needs of the convict prison service and the military. Confinement indoors and the type of work made some men irritable, as did the new disciplinary regimes which irked men who arrived from the more undisciplined culture of the hulks. This led to clashes between officers and prisoners. With the new emphasis on punishment from the mid-1860s, some of the more reformative aspects of imprisonment at Dartmoor, as at other public works prisons, were substantially reduced or abolished, and more punitive labour, such as stone-breaking, was introduced.

Convicts were also employed in the reconstruction and development of the prison to be used for their confinement. Many of these buildings survive and continue in use today. Because the prison remains in use by Her Majesty’s Prison Service, it is not possible to explore the site.

However, you can still see the distinctive iron gate arched with immense blocks of granite which form the entrance to the prison. If you walk up the road from this point, you will be able to look down at some of the Victorian prison buildings. There are other good vantage points around Princetown which give a good sense of the character of the site. 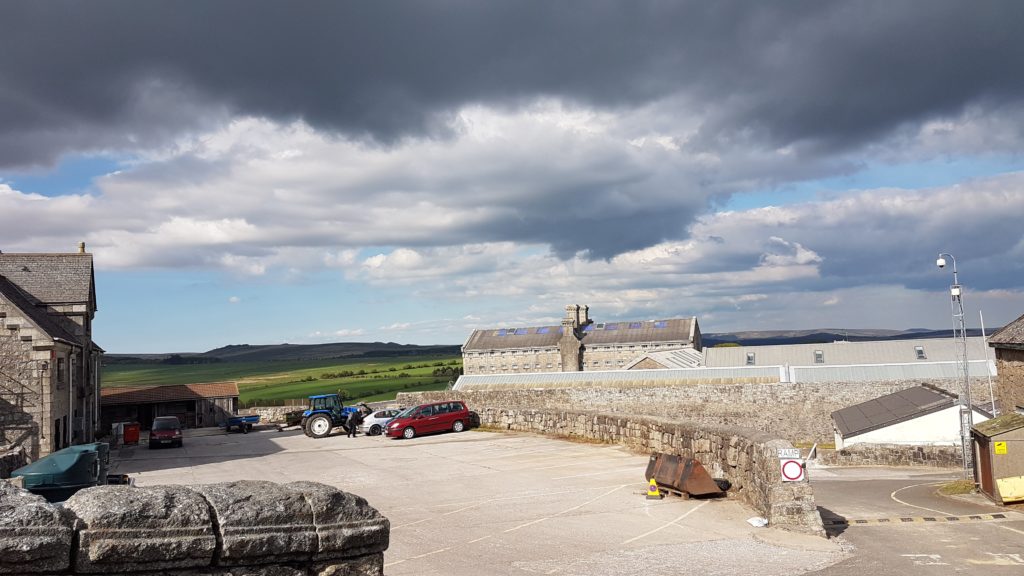 Further up the road, however, is the Dartmoor Prison Museum, which is well worth a visit. It is owned and managed by the prison, and its display which charts the history of the institution from the early 1800s to the present day and contains many fascinating objects is worth exploring. In the basement are several cells which give a sense of the changing nature of accommodation within a British prison between the 19th and the late 20th century. 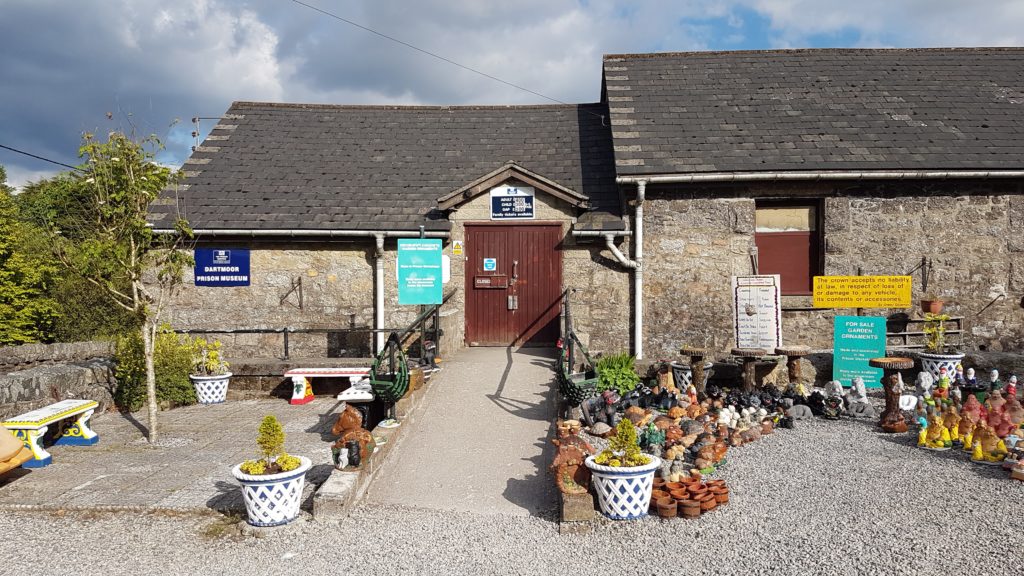 Convict labour was also used to build the town –  primarily, the living quarters for officers and their families. And not just in the mid-19th century. The postcard below shows prisoners building Hessary Terrace in 1908. As in the early years of the 19th century, Princetown grew in 1850 to service the needs of the prison. 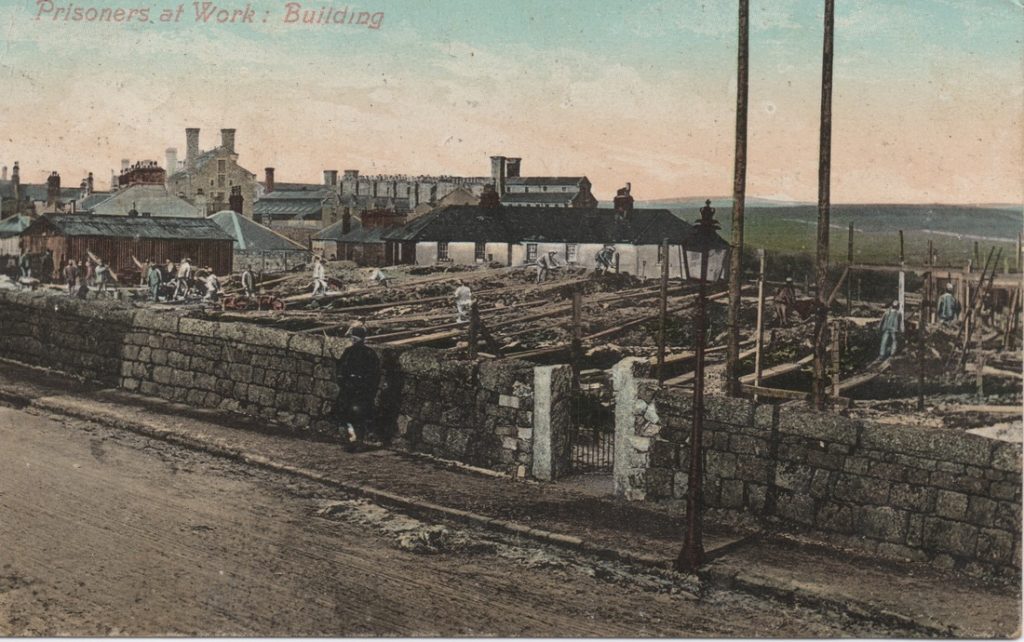 But it also became a town in its own right, with civic facilities, and, by the end of the 19th century, a passenger railway. As such, it required policing. In the middle of the town, on Tavistock Road, you can see the Old Police Station, which opened in the year following the establishment of the Devon Constabulary, that is, 1857. 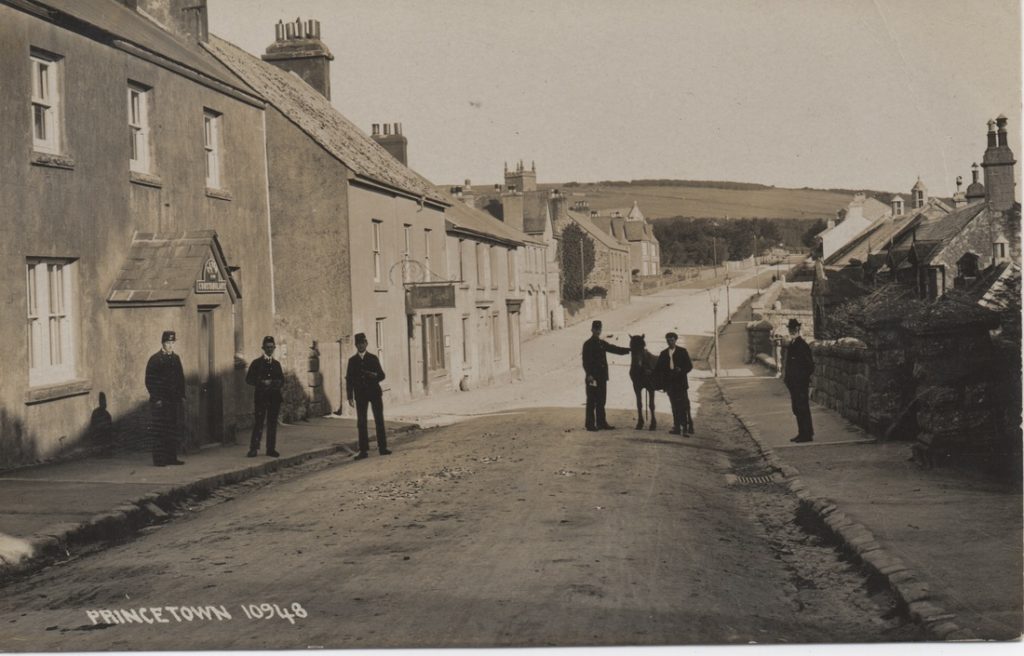 The Old Police Station, with members of the Devon Constabulary outside (With kind permission of David Worth)

For 101 years, officers policed Princetown from this base. The last occupant was PC Charlie Battershell, and the station closed in 1958. It has since been converted into a cafe. The proprietors advertise the fryers as being situated in the former cells! But in truth, almost nothing remains of this lock-up, except for a row of holes in a window sill and lintel above, suggestive of former bars covering the aperture of a cell. 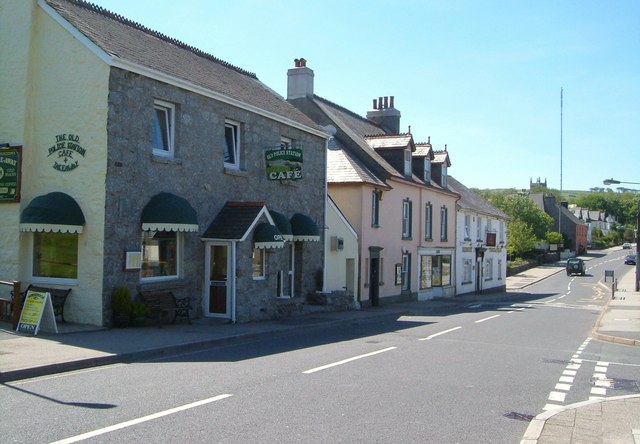 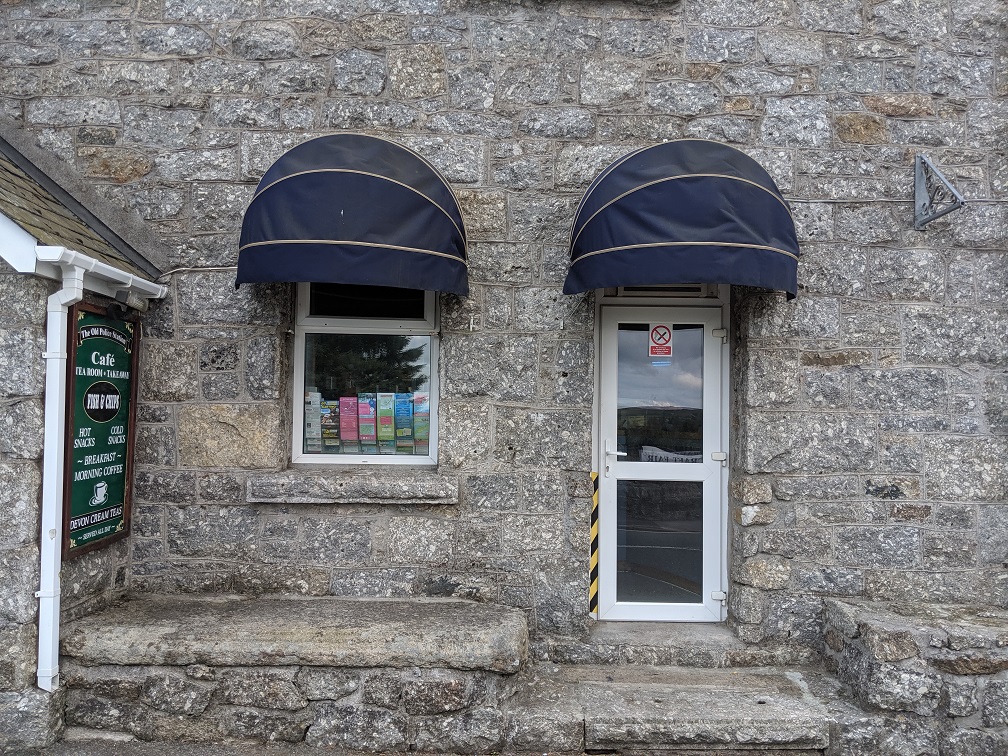 Probable cell window to the right of the door, and to the left of the current main entrance to the cafe Photo by: (c) David Worth, with kind permission

The last stop on a tour of Princetown’s prison history has to be the Dartmoor Brewery. 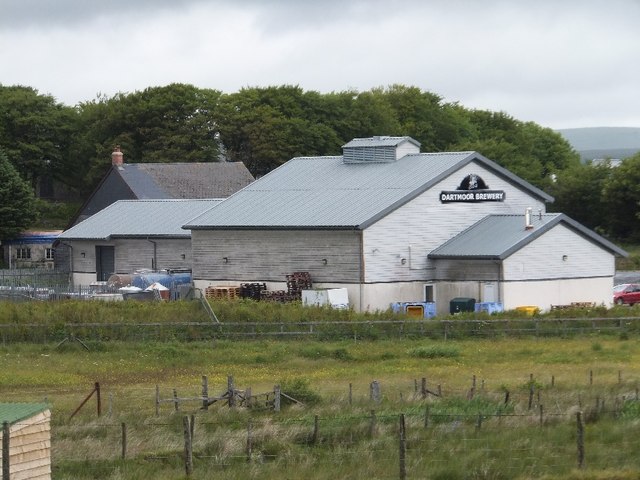 When Simon Loveless and Philip Davies established their brewery in the back of the Prince of Wales pub in 1994, they found Princetown’s famous penal past irresistible in the development of their brand. Jail Ale, launched in the same year, has since become famous in its own right in the surrounding area. 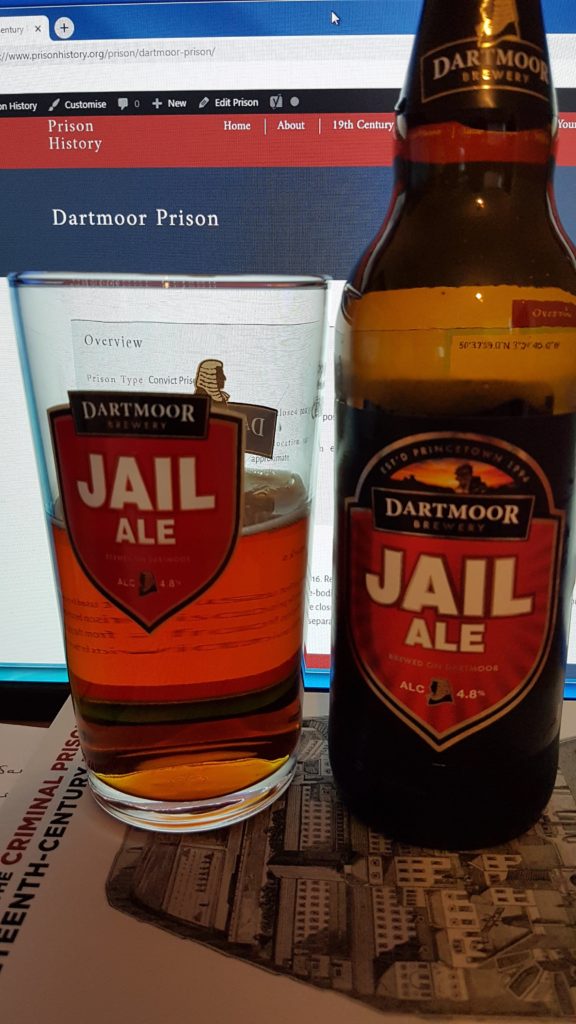 With many thanks to Princetown historians and all-round Dartmoor experts: Simon Dell, Bill Radcliffe and David Worth for their help, especially with finding out more about the Old Police Station. David Worth’s website contains many valuable documents and images charting the history of Princetown.

Simon Dell’s book, The Beat on Western Dartmoor (Forest Publishing, 1997) provides much valuable information about policing on the moors.

Have you visited or do you plan to visit prison history sites in Dartmoor after reading our Go Explore guide? Have you paid a visit to a lock-up or prison after discovering it in our database?