The recently closed Holloway Prison in Islington, London, has a fascinating history and so needs a fitting legacy. 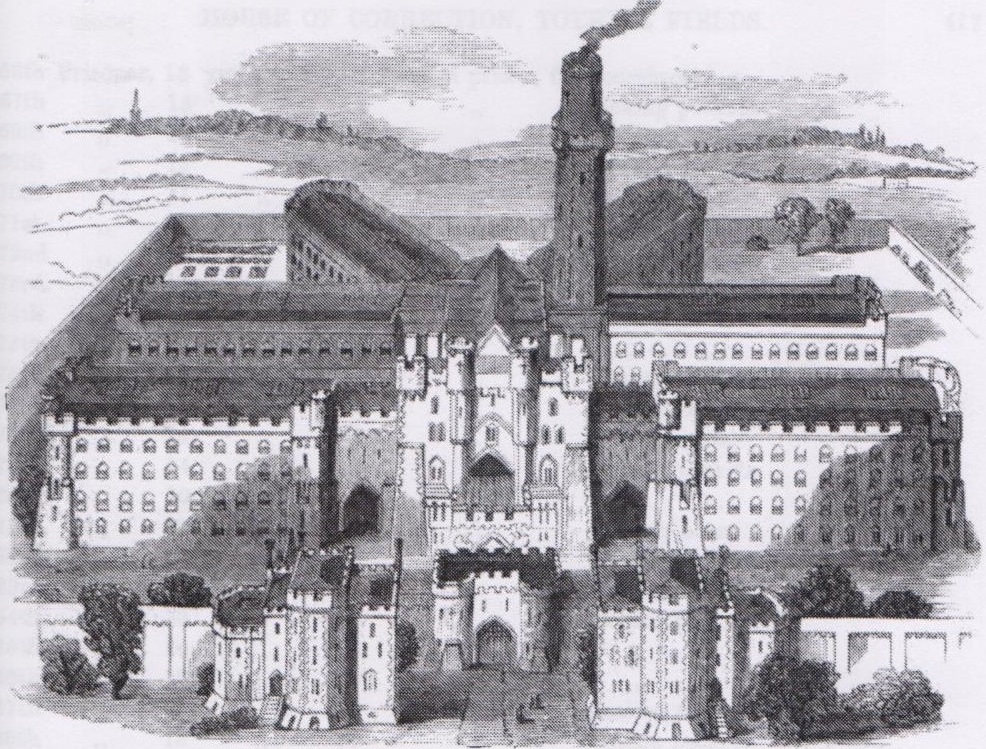 Built between 1849 and 1852 to replace the old house of Correction in Giltspur Street, Smithfield, the new Holloway City Prison had 306 single ‘living cells’ – 285 for men, 61 for boys, and 60 for women – as well as additional punishment and reception cells. In the 1850s, more than 2,200 men, women and children were sent to this prison each year to serve sentences of imprisonment for a range of offences, from petty theft and vagrancy through to burglary and manslaughter.

Prisoners were put to work from seven in the morning to seven at night, six days a week. Several trades were carried on – matmaking, shoemaking and tailoring (some prisoners were taught these trades in the prison). There was also a treadwheel. The women picked oakum or were employed in the prison laundry. 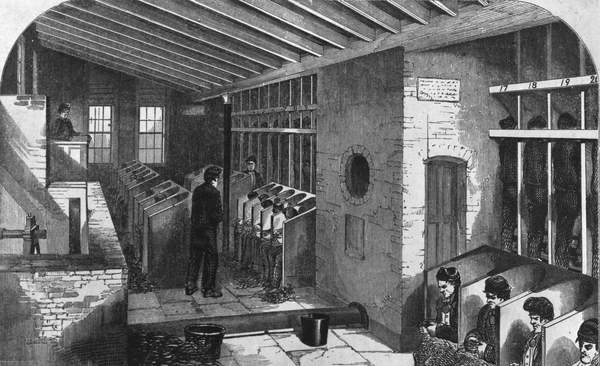 There was also a school to teach well-conducted prisoners reading, writing and arithmetic, as well as history and geography. In the late 1850s, the journalist Henry Mayhew witnessed a lesson given by the schoolmistress to the adult women:

“Most of the prisoners read very fluently and correctly, and conducted themselves with great propriety of demeanour. They afterwards clustered around the map of England, alongside their amiable teacher, and appeared to take great interest in their geography lesson.”

In 1903, Holloway became a female-only prison. Soon it was used to imprison suffragettes who broke the law in their campaign for women’s political rights, including Emmeline Pankhurst, Emily Davison, Charlotte Despard and Mary Richardson. In 1909, Sylvia Pankhurst designed the Holloway Prison brooch – a portcullis symbolizing the House of Commons with a superimposed broad arrow of the prisoner – in recognition of the punishment these women had endured. 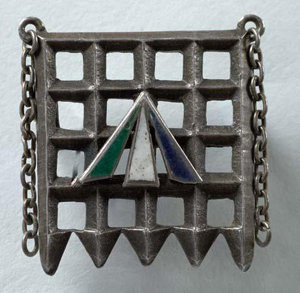 Holloway Prison was also the site for the last execution of a woman in the UK. Ruth Ellis was hanged inside the prison on 13 July 1955 for the murder of David Blakely. The campaign against her punishment represented a high watermark of public opinion against the death penalty. Legislation abolishing the death penalty for murder in Great Britain followed ten years later (1965).

From the late 1950s, Holloway Prison became a place for new ideas in regimes for female prisoners. Governor Joanna Kelley pioneered the idea ‘family groups’ of prisoners to provide mutual support. In 1967, Holloway Prison was rebuilt to better facilitate modern conceptions of imprisonment and reform. However, in the process, the Victorian turreted gateway to the prison was lost. 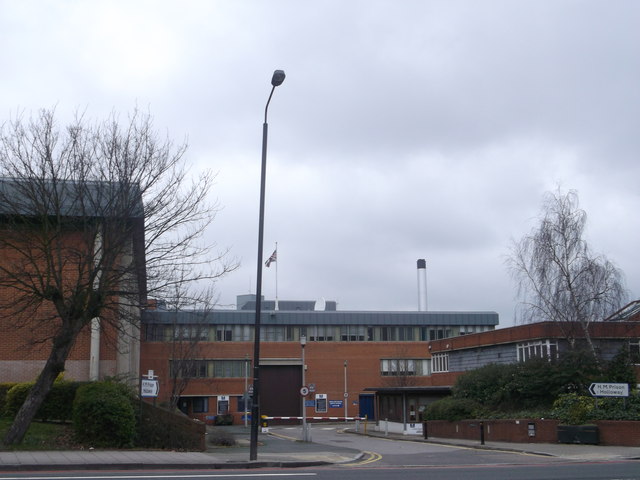 In the late 20th century, Holloway Prison was the largest women’s prison in Western Europe. It was home not just to women serving sentences of imprisonment but it was also a hub for agencies and charities which specialized in and catered for the needs of vulnerable women.

Holloway Prison was closed in July 2016 as part of a government policy to remove historic institutions from the penal estate. Since 2010, successive government ministers have argued that such prisons are outdated relics totally unsuited to the rehabilitation of prisoners. But there is also an economic dimension. Historic prisons such as Holloway are located on prime real estate in England’s inner cities.

The 10-acre Holloway prison site has recently been acquired by Peabody, a London housing association. Their plan includes 1,000 new homes, a proportion of which will be affordable housing, new green spaces and playgrounds, new local shopping facilities, and a ‘women’s building’ – to serve as a legacy which acknowledges the important history of the site.

Unfortunately, in the final Masterplan for the Holloway Prison site, the innovative and exciting idea of a ‘women’s building’ has been reduced to a single floor, split level 1400sqm community facility with just 350sqm of ‘flexible’ room space allocated to specialist Women’s Services. This plan is massively disappointing. But it doesn’t have to be this way. 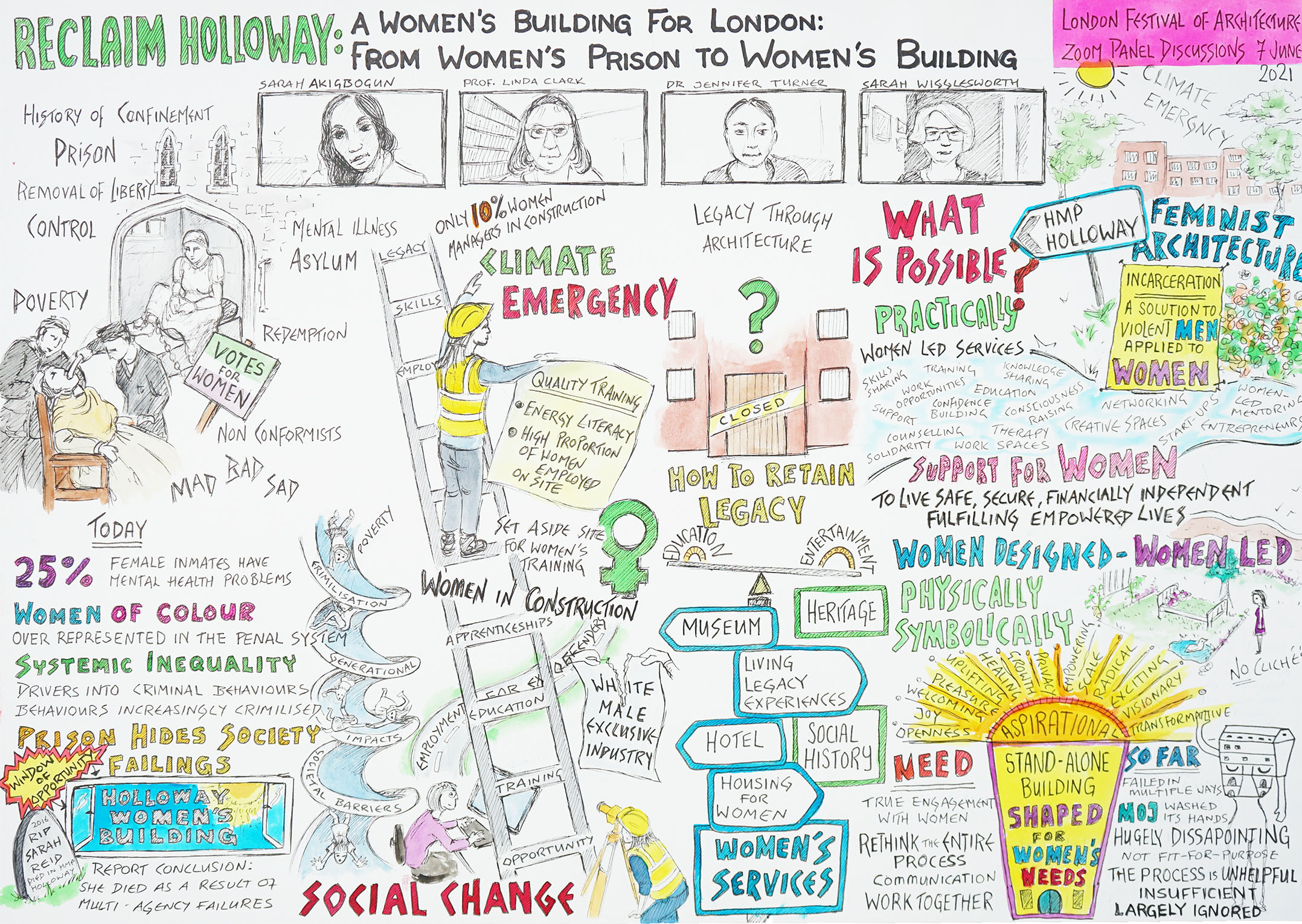 As the campaign group, Reclaim Holloway, declare, the Holloway Prison site represents ‘the opportunity of a generation to reimagine women’s services and spaces in the UK’.

Through extensive work with architects, artists, women’s organisations and charities, academics and women with experience of imprisonment, Reclaim Holloway have developed an alternative and exciting plan for a women’s building on the site. Their design includes space for:

Representation of the proposed Women’s Building from Reclaim Holloway

The plan is radical and ambitious but as such offers the very best chance of making a material difference to the lives of women in London, and will keep many out of prison. This is a truly fitting legacy to Holloway Prison. 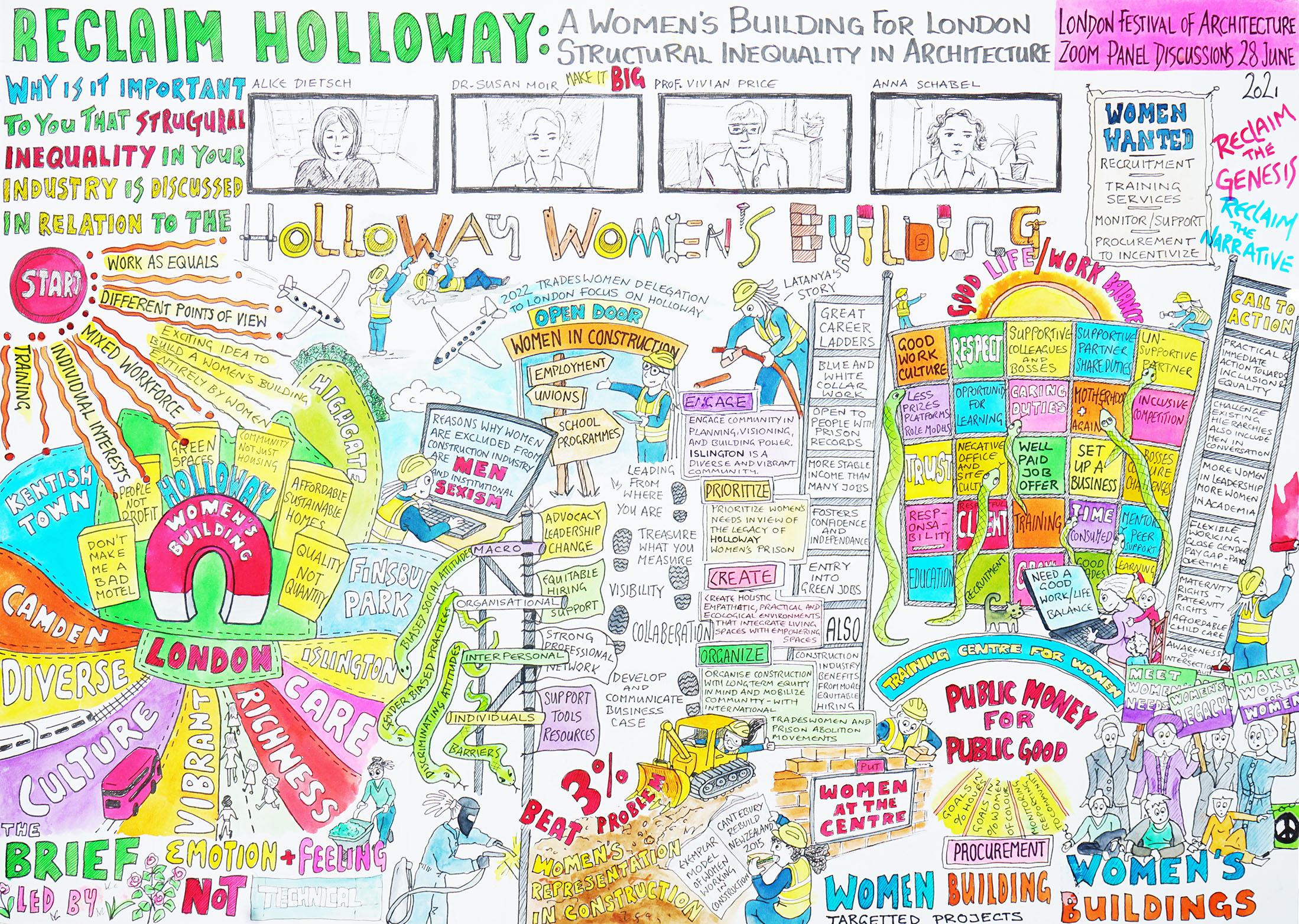 Capturing the great potential of the Holloway Prison site, with benefits for all in society © Niki Gibbs

Help us to secure it!

Support Reclaim Holloway’s campaign for a women’s building on the Holloway Prison site: