David Griffiths, of the Huddersfield Local History Society, provides a valuable insight on local discussions and negotiations to establish places of confinement in 19th century Huddersfield

The manorial/parochial constable traditionally had responsibility for the town prison, which was not a permanent place of incarceration but was used to hold prisoners before their appearance at petty or Quarter sessions.

In the late 18th century this was in Castlegate, between Quay St and Dock St, near where the telephone exchange is today.   It became known as ‘The Towzer‘ in about 1800 – taking this name from the then chief constable’s dog (see D.F.E. Sykes, The History of Huddersfield and its Vicinity, 1898, p. 246) – and appears as such on  George Crosland’s 1826 map. 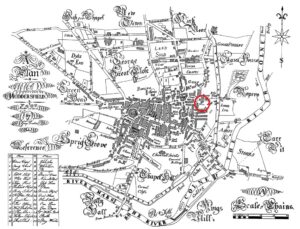 George Crosland’s 1826 map of Huddersfield, showing the location of ‘The Towzer’ on Castlegate (https://huddersfield.exposed/wiki/Map_of_Huddersfield_(George_Crosland_1826))

By 1831, the poor condition of ‘The Towzer‘ was attracting complaints, and in a letter to the Leeds Mercury (in January 1831) Joseph Beaumont, the constable, acknowledged that it was unventilated and stood over a common sewer.  He had, he reported, asked John Bower, agent for the Ramsden family – who owned the land of the town centre – for a new plot, and one had been offered.  He had then sought funding for a new building from the county rate – which was mainly used for prison purposes, notably the Wakefield House of Correction – but had been told public funds could only be applied on a freehold site, not Ramsden land.   He believed £700 to £800 was needed and challenged the critics to support him in a public subscription.

In this he was evidently successful, as a tablet in Bull and Mouth St (where the present Piazza shopping centre is) recorded for over a century:

This House and Prison erected AD 1831, at an expense of £… by loan from Sir John Ramsden, Bart of £500 and on public subscription £ …. Joseph Beaumont, Constable. (Huddersfield Daily Examiner, 2 August 1946)

Beaumont’s two-year term ended in October 1831 so fund-raising and building evidently proceeded apace after the January correspondence.  It is not clear how or whether Sir John got his money back but Beaumont – a tobacconist and tea dealer – must have given his personal surety, for when the township resolved to take possession of the prison house for the deputy constable in 1835, they agreed to reimburse Beaumont £300 plus interest at such time as Sir John chose to claim it back.  The building inherited the nick-name ‘Towser’ and later became the corporation weights and measures office.

Meanwhile the Commissioners for Lighting, Watching and Cleansing (CLWC) had set up their own watch-house as a base for the night watchmen they employed, and a lock-up for overnight detainees.  In the 1820s this was in Queen St, rented from the Methodist Chapel (see Queen St Methodist Chapel Building accounts, April 1824 (WYAS-K, KC34/7), and perhaps coincided with their constable George Whitehead’s office in King St, as the former chapel was on the corner of the two. 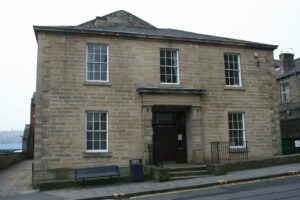 But the Methodists, like everybody else, held the property on lease from the Ramsdens, and in March 1835 the estate asked the CLWC to remove the watch-house from that site. The Commissioners promptly agreed to do so, favouring a move to ‘a more eligible situation near the Town Prison‘.  In comments published in the Huddersfield Daily Examiner in 1946, Philip Ahier confirmed that there had indeed been two ‘prisons’ next door to each other at Bull & Mouth St, which was no doubt convenient when the CLWC took over the town prison from the township in 1836. They remained in charge of both facilities until a new lock-up was provided by 1848 in the new county court building in Princess St, under the magistrates’ control.

David Taylor’s book on policing Huddersfield and its surrounding area, Beerhouses, Brothels and Bobbies is available for free download from the University of Huddersfield Press: https://unipress.hud.ac.uk/plugins/books/15/.