Help us identify this prison – Updated

We have a photograph taken outside a prison in the early to mid-20th century. Can you help us identify it? 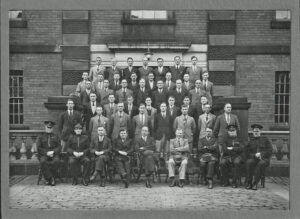 One of our Prison History subscribers got in touch with a photograph she found in her family’s archive. It is a formal photograph of prison staff outside an English prison. The subscriber’s grandfather worked in the Prison Service and features in the photograph. Between 1936 and the 1960s, this prison officer served at HMP Parkhurst, HMP Winson Green (c.1945), Canterbury (1950s), Liverpool (1950s), and HMP Lewes (by 1955).

The photograph was most likely taken outside one of these prisons. Do you recognise it? Could you help us to identify which prison?

We are delighted to announce that we have solved the mystery! Thanks to some kind followers of our Twitter account – @prisonhistoryuk – the photograph was passed to staff at HMP Wakefield who recognised the building as their own! ‘Definitely Wakefield,’ They wrote. ‘We still have the same light fitting.’ Thank you so much @HmpWakefield!

We passed the information on to our subscriber, who was so pleased to receive it. HMP Wakefield wasn’t on the list of prisons that she knew her grandfather served in. However, as she pointed out to us, it was – and still is – a training centre for new recruits to the prison service. Her grandfather – and the other gentlemen in the photograph – went to HMP Wakefield for training, and this is why they are in civilian clothes, rather than prison officer uniforms. Knowing this we were able to date the photograph too: it was taken sometime between 1932 and 1936.

Our subscriber passed on this lovely message for us to share:

I am thrilled that the Prison History Project has solved a mystery for my family regarding the history behind the photograph of my Grandfather. He was a long-serving member of the Prison Service for many years and proud of his ‘time’ in the job. This photograph was a riddle that we could not solve and without the project, it would have stayed that way. We send them our thanks for their support in solving the history behind it.

We were just so glad to be able to help!