Unidentified prison – Can you help?

Can you help us to identify this prison?

A correspondent from Phoenixville, Pennsylvania, recently got in touch to ask for our help in identifying a prison which appears in a stained glass window in his church, St Peter’s Episcopal. 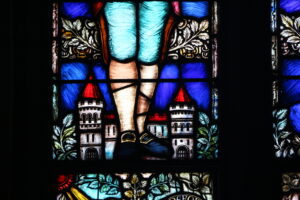 The window features the famous penal reformer, John Howard. Behind him is a structure which looks like a prison, possibly located in a gatehouse. Gatehouse prisons were not uncommon in the pre-reform era. One of the most famous was Newgate Gaol in London: the old city gate functioned as a the prison until the 1770s when a new prison, entirely independent of the ‘gate’, was built from the designs of George Dance, who was heavily influenced by John Howard. Other ‘gate’ prisons also existed in England in the mid 18th century though few images seem to have survived – at least we haven’t found many! 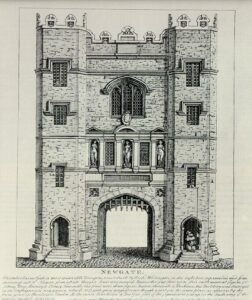 Hence we are struggling to identify this prison in the stained glass window. The colours – especially on the turrets – are likely not accurate, but the structure of the building – including the distinctive turrets – might well be. It is likely that this is a prison visited by Howard on one of his tours of prisons in England, Wales, Scotland and Ireland.

Below the main image of John Howard is another picture depicting the penal reformer in conversation with an unfortunate prisoner. 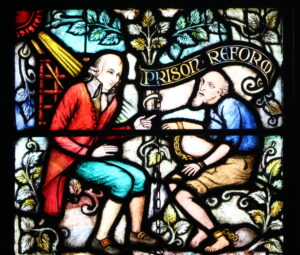 Do you recognise this prison? Can you help? Please do get in touch if you can. All suggestions of possible candidates would be very gratefully received!