The Cirencester Lock-up is a building with two distinct stories.

Today, it can be found at the back of the Cotswold District Council offices on Trinity Road. But it began life on the other side of town in Gloucester Street, where it was built in 1804 as a facility to hold drunks, vagrants, troublemakers and accused criminals.

Another of our great finds – assisted by lots of interesting imagery and information! 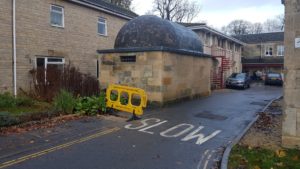 Cirencester Lock-up, at the back of the Cotswold District Council offices (© Rosalind Crone)

A local builder, John Mills, was awarded the contract. Records of his agreement with the town’s authorities survive, and are quoted in a pamphlet about the history of Cirencester Lock-up published by the Cotswold District Council. Mills agreed the following specification for the design and construction of a 2 cell lock-up: 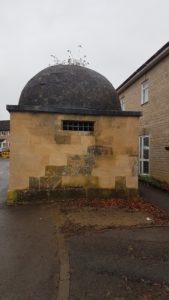 Side of the lock-up, showing the window of one of the cells. Note its proximity to the residential dwellings at the back of the Council Offices (© Rosalind Crone)

Cirencester Lock-up was used by the town authorities for thirty years. In 1837, the town’s court leet decided that it had become ‘insufficient for the purpose [of a Lock-up house], and cannot be improved without still being a nuisance or annoyance to the Public’. They recommended that it be closed and removed.

A new lease of life

In the same year (1837), the construction of a new workhouse for the recently formed Cirencester Poor Law Union was completed on what is now Trinity Road. An arrangement was made with the Board of Guardians to move the Cirencester Lock-up to the garden of the workhouse. It became a ‘refractory ward’ for the workhouse, in other words, punishment cells for paupers who misbehaved in the workhouse. 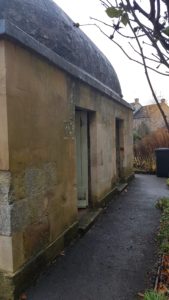 Showing the doors to the cell doors, which face away from the workhouse buildings (© Rosalind Crone)

With a footprint of approximately 24 square metres, Cirencester Lock-up is large. It contains two cells, each with its own external door, facing away from the workhouse. Built of Cotswold Stone, it is an imposing structure. The walls are exceptionally thick, with a double depth of ashlar blocks. It is topped with a domes roof, constructed from a single layer of stone. The use of a dome is typical for the area, though the size of this one is quite remarkable. 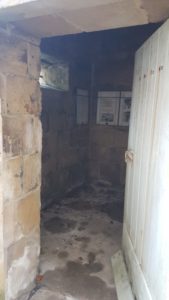 The cells are also distinctive for their size. According to local legend, up to 30 people could be detained in each cell. It would be interesting to test that story! Each cell has a barred window, or rather aperture – it was meant for ventilation, and not to give prisoners to view to the outside. The domed roof creates, on the inside, an impressive vaulted ceiling. The cells are now completely empty, though we can assume that they were once furnished with a bench or bed, and some kind of toilet facility. 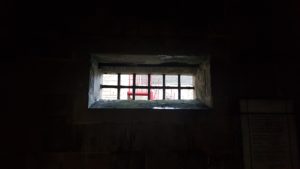 When the workhouse was converted into a hospital, sometime in the early 20th century, the lock-up in the garden was used to store plant equipment used to provide heating for the buildings on the site. In 1979, the Cotswold District Council took over the site for use as an administrative centre. By this time. the lock-up had fallen into a dilapidated state. An application was made to demolish it but this was refused. Instead, the Cirencester Lock-up was restored with the intention of opening it to visitors.

Today, interpretative panels providing information on the history of the lock-up and crime and punishment in Gloucestershire adorn the interior walls of both cells. There is also a plaque on the outside of the building which identifies it as a lock-up. 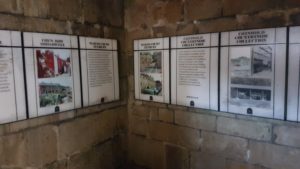 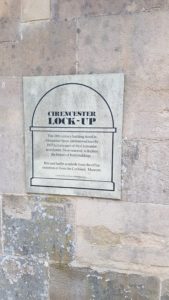 Plaque on the exterior wall of the lock-up (© Rosalind Crone)

It is possible to visit Cirencester Lock-up and to see inside the cells – please contact the Cotswold District Council to make an appointment.