For this month’s featured lock-up, we’ve chosen one of the more unusual sites in our database: a lock-up located on a bridge, hanging over the water, in a former chapel…

But that’s not the only reason why we love Bradford-on-Avon Lock-up. Over the past few weeks, we have received a collection of beautiful, historic images of this lock-up courtesy of the Wiltshire and Swindon History Centre, as well as some exceptionally detailed information on the history of the lock-up from local historian and author of The Bridges of Bradford-on-Avon, Ivor Slocombe.

Before we explore the photos in-depth, we’d like to invite you to explore the Bradford-on-Avon lock-up itself, with us!

On our recent ‘lock-up road trip’ around Wiltshire, Gloucestershire & beyond, we stopped off in Bradford-on-Avon to chat with Ivor and to go inside this unique (and slightly foreboding) 2 cell lock-up.

Watch our video to explore the Bradford-on-Avon lock-up with Dr. Rosalind Crone and Ivor! 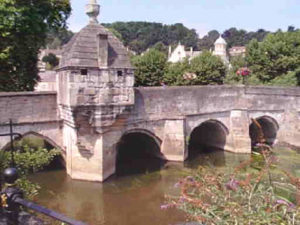 A medieval bridge and chapel

Both the bridge and its chapel date to the 13th century, and, according to Historic England, may even have replaced an earlier bridge on the same site. In any case, it was a substantial and important river crossing, and in 1769 the width of the bridge was doubled to accommodate more traffic. 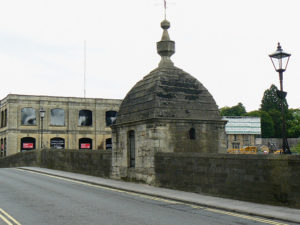 While the chapel was still in use in the late 17th century, in the early 18th century it was rebuilt, and functioned as a single-purpose room. According to several sources, the room was, when necessary, used as a lock-up. 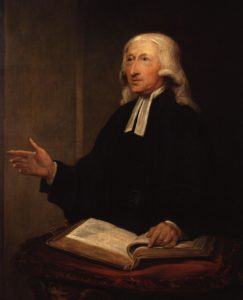 Although several sources state that the famous Methodist preacher, John Wesley, was imprisoned here during one of his visits to Bradford-on-Avon between 1740 and 1790, this is not true. It was in fact one of Wesley’s associates, William Hitchens, another Methodist preacher, who spent a night in the lock-up on 30 January 1757 and later wrote about his experience in a letter to Wesley:

For at Bradford in the evening I was pressed for a soldier, and carried to an inn where the gentlemen were. Mr Pearse hearing of it, came and offered bail for my appearance the next day. They said they would take his word for ten thousand pounds, but not for me; I must go to the Round House, the little stone room on the side of the Bridge; so thither I was conveyed by five soldiers. There I found nothing to sit on but a stone, and nothing to lie on but a little straw, but soon after a friend sent me a chair on which I sat all night. I had a double guard, 12 soldiers in all, two without, one in the door and the rest within. I passed the night without sleep, but not without rest, for, blessed be God, my peace was not broken a moment. My body was in prison, but I was Christ’s freeman; my soul was at liberty and even there I found some work to do for God; I had a fair opportunity of speaking to them who durst not leave me, and I hope it was not in vain. (W. Norman Warren, Wesley and his Preachers at Bradford-on-Avon (1938), https://history.wiltshire.gov.uk/community/getprinted.php?id=424)

In the nineteenth century, the chapel was modified once again to create two lock-up cells. This modification was previously dated to about 1820, but more recent research suggests it happened as late as the 1840s.

As the plan below shows, these cells were accessed via a central lobby which communicated with the street. Each cell was furnished with an iron bed, at the end of which was installed a ‘hopper’ or toilet. These toilets were connected to a chute which sent waste directly into the river below. At least one hopper is inscribed with the name of the manufacturer – CRISP – and has a partially obscured date, which appears to be ‘1885’. This suggests the hopper was made at the local iron-foundry, run by Henry Crisp in the 1880s, and which produced, among other things, gratings and drain covers for the town. In other words, it seems likely that the cells were created in the 1840s, and then improved in the 1880s. 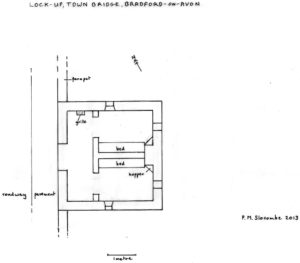 Plan (to scale) of the interior of the lock-up, showing the two cells, with position of the beds and hoppers (or toilets) with chute into the river. Drawn by P.M Slocombe, 2013 ( © P.M. Slocombe (with kind permission))

Security was a major concern. As Ivor Slocombe explains, when the two cells were formed, the fireplace, located on the west side of the single-purpose room, was removed. The two medieval windows, a distinctive feature of the 13th century chapel, were stoned up, because officials were concerned that, being made of soft stone which could be hacked away and being accessible to prisoners in both cells, these apertures could have facilitated an escape. Doors to the cells were made of iron. 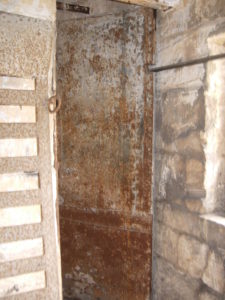 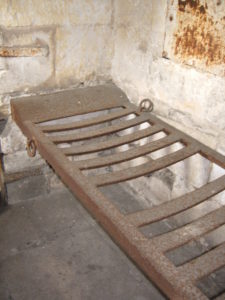 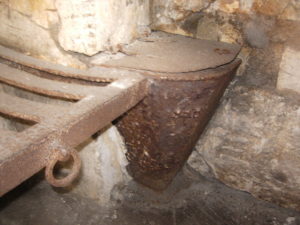 Lock-up interior, showing the toilet (or hopper) located at the end of the bed frame. (© P.M. Slocombe (with kind permission))

To aid ventilation, small slots at the top of the cell walls were created. But these slots admitted little light, making the cells very dark. As the Historic England listing notes, ‘on Ashmead’s 1864 apportionment, the building on the bridge is named as the “Blind House”. 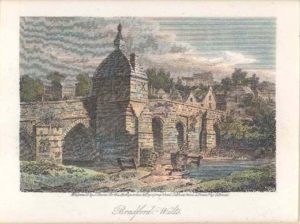 Colour engraving, 1809. Before the creation of the two cells, and the new apertures on the west side (facing the river). (Wiltshire & Swindon History Centre, MODES Database, P11874 (with kind permission)) 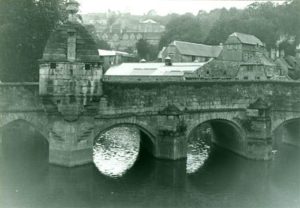 Photograph, 1930s. Shows the two apertures made at the top of each cell, facing on to the river (Wiltshire & Swindon History Centre, MODES Database, WILTM P11973 (with kind permission))

What did remain, however, was the copper gilt weather vane on the roof of the lock-up which boasted an emblem of a fish, and was known locally as the ‘Bradford Gudgeon’. According to Leslie Brook, the weather vane gave rise to the saying, that those who had been confined in the cells ‘had been under a fish but over the water’.

It is not clear when the building ceased to be used as a lock-up. The Ordnance Survey Map of 1887 called it a ‘Chapel’, and Historic England suggests it might also have been used as a toll house for the livestock market.

Ivor Slocombe states that the lock-up was fully restored in 1927 before the Lord of the Manor passed ownership to the Wiltshire County Council. During the restoration, it was decided to re-introduce the medieval windows in order to give some light to visitors. The full structural report prepared by the architect for the 1927 restoration survives and is available for consultation. 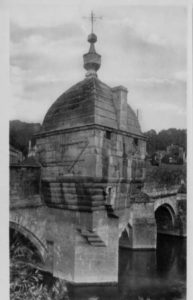 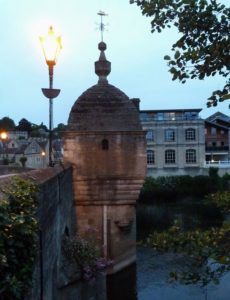 The lock-up in c.2015. The medieval windows on the north and south sides restored (as compared with the image above). The weather vane with fish emblem can also be seen in this photograph (cc-by-sa/2.0 – © Rob Farrow – geograph.org.uk/p/4546801)

Every September, there are special Heritage Open Days when the lock-up is open to the public to explore. You can find out more about these here: https://www.heritageopendays.org.uk/. If you do pay a visit, we would love to hear about your experience, and we would be very grateful for any pictures you’d like to share with us.

To find out more about this lock-up, and the fascinating history of the bridge at Bradford-on-Avon, check out Ivor Slocombe’s book, The Bridges of Bradford on Avon, published and distributed by Bradford-on-Avon Museum.