The Lock-up in Ashwell, Hertfordshire

In May 1994, Anglia News broadcast a piece in which I was seen to lock up a group of children in the Lock-up and walk away apparently without a care in the world. A few people have asked me what happened to the children; others seem to want to enlist my services! I can assure readers that the children are no longer in the Lock-up and that this was not a service offered by Ashwell Education Services. 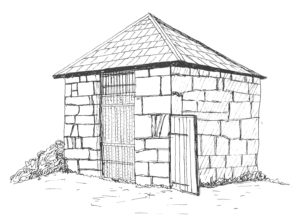 Ashwell Lock-up, one of four surviving in Hertfordshire, was built in 1800. A chapel on the north-east corner of the chancel of St Mary’s Church was taken down in 1799. The blocks of Totternhoe chalk were not wasted but used to build the Lock-up.

Incidentally, evidence for the chapel can still be seen; in the chancel, there are two doorways, the blocked up one would have led into the chapel. There is a piscine on the outside wall of the church which would have been inside the chapel and there is a slight rise in the turf where the foundations are. These were seen in a recent excavation when a new gas pipe was laid.

But back to the Lock-up. It was originally used by the village constable to lock up people making a nuisance of themselves. After spending the night in the Lock-up they were taken to the magistrate in Royston, the following day. It seems to have served this purpose until early this century.

Amos Pammenter’s night in the Lock-up

There is a story that recalls how Amos Pammenter and friends started making a nuisance of themselves after having spent a good evening none of the many pubs in the village. The constable was called and Amos was put in the Lock-up for the night. While there his friends felt he needed further refreshment which they fed to him through the grille with the aid of a straw. They then went home. Amos, however, did not sleep and, getting bored, dug a hole under the door, crawled through and went home to bed. 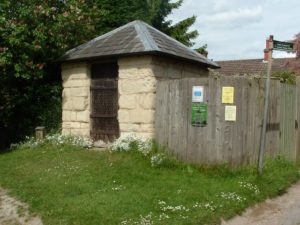 The authorities then decided that the Lock-up was no longer suitable for the purpose for which it had been build. It was left empty for many years although it now appears to be in use again – not for locking up children I hasten to add.

Do you have a story to tell? Then why not become a Prison History contributor!

We’d love to hear your story, find out how. And don’t forget to follow us on social media.