The history of Bridewell

We’re delighted to share the history of Bridewell Palace from author David Breakspear.

A House of Correction in 16th century England did exactly what it said on the tin. They were established to correct what was considered as disorderly behaviour. Petty criminals and citizens considered ‘idle’ would receive whippings and be subjected to intense periods of hard labour.

The first House of Correction was opened at Bridewell Palace in 1553 at the former residence of King Henry VIII. Houses of Correction, thereafter, became known as Bridewells. The name Bridewell came from the nearby ‘holy well’ of St. Bride’s church. And the church’s name is from Saint Brigid of Kildare, which is sometimes written as Bride. 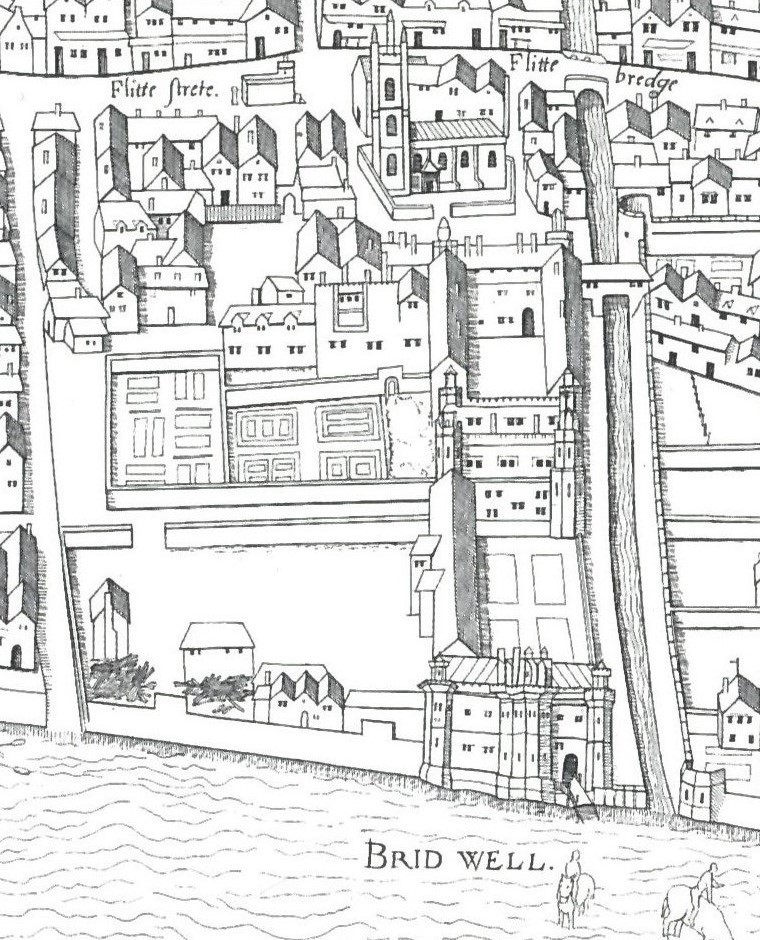 Detail from the “Copperplate” map of London, surveyed 1553-9, showing the former Bridewell Palace, with its frontage on the River Thames, and extending along the bank of the River Fleet towards St Bride’s Church (visible in the background). Public domain, via Wikimedia Commons

In 1510 Cardinal Thomas Wolsey built a house on the site of the old St. Brides Inn close to the church and the banks of the River Thames. Wolsey lived here until taking up residence in Hampton Court in 1515.

Since Saxon times Westminster has been the centre of government and court. Following a fire there in 1512, which destroyed a large part of Westminster Palace, Henry VIII was without a palace in London.

Cardinal Wolsey thus transferred Bridewell House to Henry VIII. However, in 1530, Wolsey failed to annul Henry’s marriage to Catherine of Aragon and was subsequently stripped of all his titles. Bridewell ceased to be a royal palace with Henry moving into Wolsey’s home, Hampton Court.

Bridewell and the French Ambassador

In 1531, Bridewell was leased to the French Ambassador to the court of Henry VIII, Jean de Dinteville. In 1533 Hans Holbein captured de Dintevill in his painting The Ambassadors. He stands next to the Bishop of Lavaur, Georges de Selve. 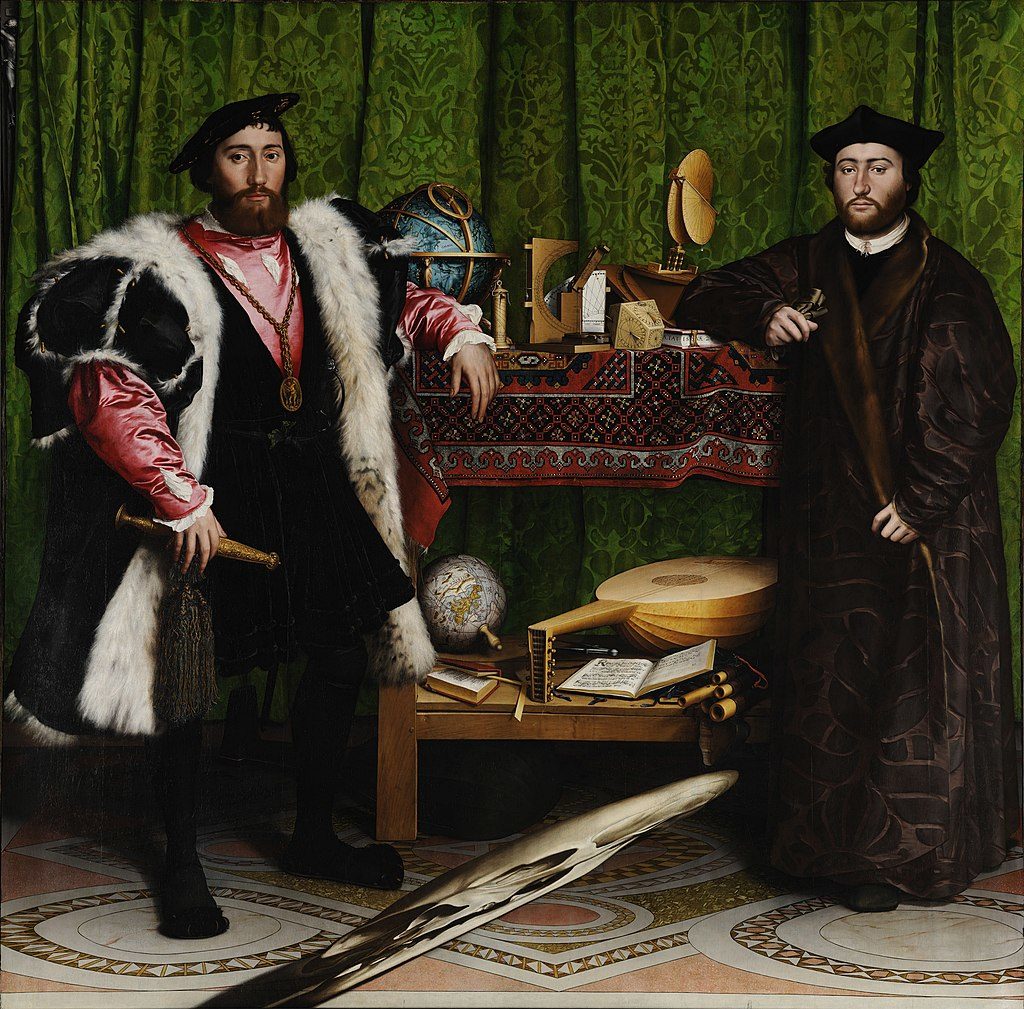 Hans Holbein the Younger’s The Ambassadors. It features Jean de Dinteville, French Ambassador to the court of Henry VIII of England, and Georges de Selve, Bishop of Lavaur. Public domain via Wikimedia Commons

Bridewell’s transition to a prison

Henry VIII’s son, Edward VI in 1553, gave the palace to the City of London for use as a prison for petty offenders. 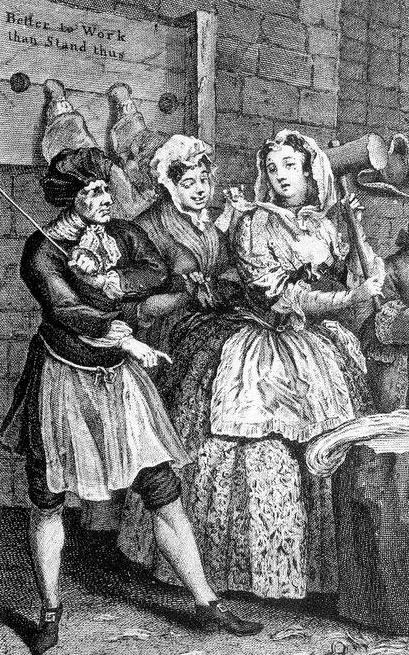 The Praise and Vertue of a Jayle and Jaylers

The following verse has been taken from the poem The Praise and Vertue of a Jayle and Jaylers by John Taylor and is cited in Sean McConville’s A History of English Prison Administration (Routledge, 2015).

Bridewell vnto my memory comes next;
Where idleneſſe and lechery is vext:
This is a royall houſe, of ſtate and port, (Court.
Which the eighth King Henry built, and there kept
King Edward ſomewhat ere his timeleſſe fall,
Gaue it away to be an Hoſpitall:
Which vſe the City puts it well vnto,
And many pious deeds they there doe doo:
But yet for Vagabonds and Runnagates,
For Whores, and idle knaues, and ſuchlike mates,
’Tis little better than a Iayle to thoſe, (blowes.
Where they chop chalke, for meat and drinke and
In this houſe thoſe that ’gainſt their wils doe dwell,
Loue well a Bride (perhaps) but not Bridewell.

How Bridewell operated as a prison

Bridewell operated under a royal charter and not as an ‘Act of Parliament’. A court of governors was established who would meet to discuss the management of their relevant institution. The governors of Bridewell met every two-to-three weeks and would record the minutes.

“The governors were responsible for the appointment of new governors, as well as the appointment of all the hospital’s officers, including the president, treasurer, and auditor general. They also appointed those who actually carried out the work of the hospital including stewards, beadles, porters, matrons, physicians, apothecaries, surgeons, nurses, and arts masters (for instructing the apprentices). They decided on salaries, and on annual gratuities which topped up the salaries. Much of the business of the court was taken up with the management of the hospital’s finances and its properties, for example granting leases. Some of the governors’ work was devolved to separate committees.’

The closure of Bridewell

Towards the close of the 18th century, prison reformers became increasingly critical of Bridewell along with other prisons. Far from reforming individuals, prisons were becoming training grounds for criminals, corrupting prisoners into more serious crimes upon release.

As the influence of the reformers spread prison conditions began to improve, such as the abolition of whipping females. However, the introduction of solitary confinement became the norm.

Bridewell closed as a prison by 1855. Come 1864 the prison buildings were demolished. The only evidence left behind is the former gatehouse, with a carving of Edward VI in the arch, located in Blackfriars, London.

Do you have a story to tell? Then why not become a Prison History contributor!