by Corinne Brazier, archivist at the West Midlands Police Museum. 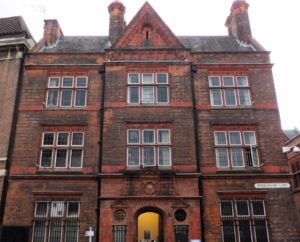 Birmingham campaigned for over 30 years to become an assize town and hold an assize court – this was finally granted in 1886 when planning commenced for the Victoria Law Courts and Steelhouse Lane Cells. Prior to this the main Birmingham custody block was in the Moor Street Public Office.

The Grade II listed Steelhouse Lane Lock-up opened in 1891 and operated until 2016. The building is separated by a tunnel that goes under Coleridge Passage which used to see prisoners being sent from the cells direct to the courts.

Prisoners would generally spend less than 24 hours in the Lock-up before being sent to court in the morning. The building had a mixture of ‘Steelhouse Lane prisoners’ (arrested in the city centre and awaiting interview/charge) and people charged with offences all over Birmingham, who were brought in on a custody van each morning. Some of the original iron railings have been removed and partitions put in to separate Steelhouse Lane prisoners from ‘Lock-up prisoners’.

There are a number of occasions whereby prisoners served short sentences at the Lock-up – these individuals are called Home Office prisoners as they have been convicted, and this would generally be during a prison officer’s strike although the Lock- also took prisoners from Strangeways Prison following the riot there in 1990.

There were originally around 70 cells spread across three floors. The Lock-up is entered at ground level and there is a basement and a first floor. The basement contains the original kitchen and there is evidence of an old dumb waiter (potentially powered by an early Birmingham hydraulics network) which would have been used to transport food up to the ground and first floors. 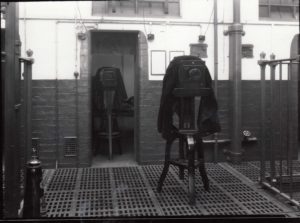 There is a glass roof which would have provided all the natural light into the building, in addition to a single window on each floor down the side of the building, with no other windows in the cell area. There is evidence of small enclosures next to each cell door where an oil burner or lantern would have provided light into the cells for prisoners and out for staff working there.

The top floor (due to the natural light) was used for prisoner photography and it is here that the famous peaky blinder mugshots were taken. Senior officers would also come across from Birmingham Police Headquarters on Newton Street to have official pictures taken. The Lock-up is where the force based its first police run photographic studio after originally using studios on Moor Street.

The cells get smaller as you go down the building and the cells in the far end originally being used for women, reach a little over five foot wide. More recently women were held on the top floor, which would have to be taken out of use in hot weather due to the greenhouse effect being created through the single glazed glass roof and lack of external ventilation.

In the 1970s some of the beds were replaced with ‘drunk beds’ which are very low to the ground, for the vast amount of intoxicated prisoners brought to the Lock-up. In later years an intoxilyser machine was based on the ground floor to take evidential breath samples, with two separate rooms being used to take fingerprints, DNA and a custody photograph. 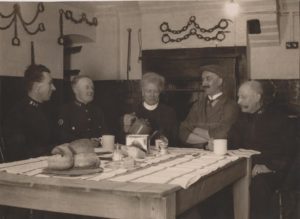 The whole building is listed, but in the early 2000s when safer detention measures were being implemented across the country, West Midlands Police negotiated with Birmingham City Council that the measures could be implemented at the Lock-up so long as four cells were kept in the same condition as they were at that point. So four cells still have their original porcelain toilet and glass window above the door.

Plans are currently afoot to raise sufficient funding to convert the Steelhouse Lane Lock-up into the new West Midlands Police Museum, to display our fantastic collection of policing heritage and memorabilia, and share some of the inspiring stories of pioneers and courageous acts from policing across the West Midlands. A variety of events are held at the Lock-up including open days, history talks, ghost hunts, theatre performances and group visits. The building is also available for hire for filming or corporate events. A booklet telling more about the history of the building is available on WMPeelers.com/shop for £5.