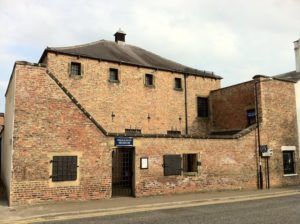 Ripon Prison & Police Museum tells the story of the police and prisons services in Yorkshire and the Humber since the early 1800s. The museum is housed in a complex of buildings that served first as Ripon House of Correction, then Ripon Liberty Prison and finally Ripon City Police Station.

Houses of Correction were established after the passing of the Elizabethan Poor Law in 1601. They used hard labour to punish and reform people convicted of minor offences, such as petty theft, vagrancy, prostitution, and disorderly conduct.

The original House of Correction in Ripon was established in 1684 in the building adjacent to the museum. The minutes of Ripon Council from 31 March 1683 read “[it was] ordered and agreed that the mayor and other justices of the peace [of Ripon]…shall set up a workhouse and house of correction for setting the poor here on work and punishment of such as by law are there punishable.”

Those held in the House of Correction were sentenced to hard labour, usually for one calendar month. At Ripon House of Correction, this included walking the treadwheel and cleaning the building. Prisoners were expected to work 10 hours in the summer and seven hours in the winter. Prisoners also carried out work to create produce that could be sold, such as picking rope fibres into oakum that could be sold for ship-building. In 1877, the total earnings from this produce was £331 15s 9d, the largest amount of prison earnings throughout England and Wales (Yorkshire Post and Leeds Intelligencer, 15 October 1877).

In the collections of Ripon Museum Trust, there are a number of documents that reveal how Ripon House of Correction operated. There are court orders for the payment of salaries or pensions of a gaolor, a chaplain, a barber and a surgeon. We also know that there was a governor, and a matron to oversee the female prisoners. Two notebooks in the collections reveal the amount of bread and oatmeal purchased for the prisoners – for example, 665 lbs of bread and 12 quarts of oatmeal in the first quarter of 1848. The prisoners were also fed beef, treacle, flour, cheese, potatoes and onions.