In this blog, Carol Jackson of the Chipping Campden History Society explains how the restoration of the Old Police Station was made possible through the establishment of a community venture scheme: The Peelers Trust. 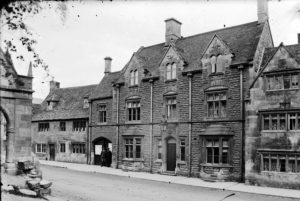 The Old Police Station in Chipping Campden, Gloucestershire has once again become an important resource for the local community. Today it houses the local Tourist Information Centre, a Post Office branch, the Dandelion Gift Shop, the History Society Archive Room, and several other local businesses. It is a lively and bustling place on the High Street. But it almost wasn’t.

After the last sitting of the Magistrates’ Court in September 1991, the building fell into disuse. At the end of the decade (1999), the building was put on the market for sale. The Chipping Campden Town Council decided to attempt to purchase the building, with a view to its use as a community centre. Instrumental in the decision-making and whole process was John Ellis (later chairman of the Peelers Trust), whose maternal grandfather was a former Superintendent who resided in the station, and whose mother was married from the station.

A working party was established and a sale agreement eventually made at a cost of £650,000.  The purchase was funded by the sale of the garden at the rear to Cotswold District Council for £250,000, the District Council then facilitating the erection of 6 affordable houses on the land.  A loan of £450,000 was taken out from the Public Works Loan Board, to be repaid over 25 years.  The balance of £50,000 was provided towards conversion costs of the building to make it fit for purpose as a mixed-use community and commercial centre. 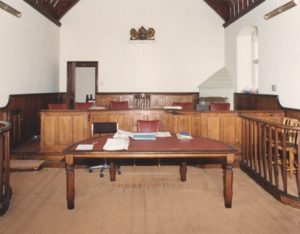 Courtroom – on final day of sitting, 25 September 1991 (© With kind permission of the Chipping Campden History Society)

The Peelers Trust was established as a charity in 2000/1 to undertake the conversion and renovation work and to manage the operation of the building.  It raised a further £450,000 through grants and donations for the works, the management of which was undertaken by the volunteer Directors and Project Manager, Bob Wilson.  A lease of 125 years from the Council was agreed, including fixed annual rental payments of £32,000 for the first 25 years (covering the cost and period of the PWLB loan repayment), after which the rental would fall to £20,000, and become subject to inflation adjustments.  The Council is entitled to nominate up to three Trustee Directors (currently only two, John Ellis and Graham Greenall, are nominated.) 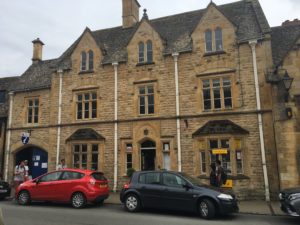 The Trust has been managing the building since, including further conversions and major repairs, most notably the basement and reroofing the Court Room and, more recently, conversions to enable the Post Office to be established in the ground floor shop, all funded by further grants and direct payments by the Trust itself.  The Trust lets most of the 13 rooms on tenancies, normally of 6 year duration, some to commercial tenants, but others, at a reduced rent, to community groups (eg. Information Centre, History Society, youth project, community radio).  The Court Room and one other are retained for meetings and short lettings.  The Town Council has made annual grants of £20,000 to support the community bodies and ongoing maintenance of the building.  The amount of the grant has not increased over the 18 years. The Trust makes 6 monthly reports, one in November to the Council, and the other to the Annual Assembly in April.