Local historian and author, Chris Hicks, tells us about some of the earliest prisoners at Horsemonger Lane Gaol. 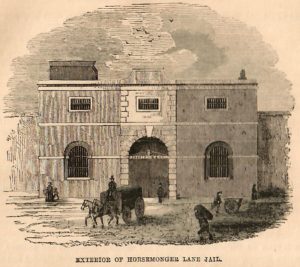 One early occupant of Horsemonger Lane Gaol was one Richard Vining Perry together with his pregnant wife and her mother.  In fact, his imprisonment there between 1792 and 1794 occurred while the gaol was still being built and they were accommodated in the house of the governor, Mr Ives.

In early 1791 fourteen-year old Clementina Clarke, then in a boarding school in Bristol, inherited a vast fortune from her uncle who had owned Jamaican sugar plantations. Perry, working as a surgeon and apothecary, but short of money heard about the fortune and contrived to abduct the girl from the school and spirited her off to Gretna Green where they were married.  As the abduction of a minor was a capital offence they fled to Flanders but returned over a year later and Perry was arrested. They were able to live comfortably at Mr Ives’ house and were visited by friends and their first child was born there.

Perry came to trial in 1794 and using Clementina’s inheritance was able to afford Thomas Erskine, the foremost barrister of the day, to defend him. After much legal argument Clementina, now pregnant again, was allowed to give evidence.  Warned beforehand that her husband would be hanged if found guilty she claimed that she was perfectly happy and had colluded in the entire business. Perry was immediately acquitted and released. 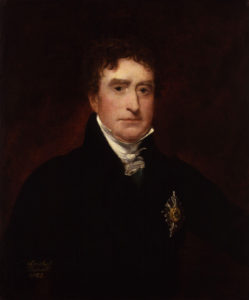 They eventually had four daughters but at some point they separated and Clementina died in poverty in Bath in 1813. Perry appears to have lived until 1834, some of the time in Jamaica. One daughter appears to have died as an infant.  The bulk of the estate being overseen by trustees the other three appear to have inherited some of the fortune.  Only one married and had children, dying in her late thirties, another died at the age of 22, while the youngest lived to the age of 88.

Chris Hicks is currently working on a book-length treatment of this fascinating story! We look forward to it, and will post an update as soon as it is available.