Local historian Rob Keep tells us more about the Middlewich House of Correction in Cheshire.

As shown in a local history plaque, on Queen Street, the original House of Correction was built in the 1630s, on the site of the current police station. 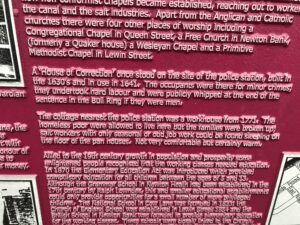 It was run by Magistrates of the County, for up to 60 prisoners, in 3 areas for men, and one for women according to a report. In 1819 it was reported that the greatest number held at one time was 180.

In 1776 visiting the ‘County Bridewell’ at Middlewich , John Howard said:

I found in my visit in 1776 all the prisoners but two were employed in picking oakum, the other two were shoemakers, working at their own trade, but at my last two visits were without employment. Allowance to each, six pounds of household bread per week. Since my last visit gaol fever has been in this prison, however only three prisoners and a child died.

Joseph Swann of Congleton was sent to Middlewich House of Correction after being sentenced to four and a half years for seditious conspiracy at the Chester Assizes. He wrote of his experience at Middlewich:

In getting there (Middlewich Prison)I was put into a ward with upwards of sixty other prisoners. We had but one fire for cooking, and for all purposes, and the number of prisoners literally filled the day house where the fire was. In one corner of the place was a pump and slop stone, where all water was obtained, and all washing and cleaning done. What with the pumping of water, washing, of kettles and pots, trampling in of snow, the place, though a brick floor, was more like a mud hole than anything else. Even the seats which were of bricks were so wet that we could not sit on them without getting our breeches wet through. The dungeons in which they slept were very little better; from ten to twenty slept in one place , their beds consisting of a little straw and a blanket. By paying two shillings a week I got a better bed and better place, besides being allowed to sit up till eight o clock, whilst the other who could not pay this money, were locked up for the night before dark. Had it not been for this indulgence, I believe they might have provided me with a wooden jacket to convey me to Chester. On 10th January 1820 I was removed to Chester.

The Chester Courant, on 17 April 1821, contained the following notice:

To be sold by Auction at the Court House Middlewich, on Wednesday 25th April

All the building Materials of Middlewich House of Correction which consist of many hundred thousand of good bricks, a large quantity of slates, stones, flags, timber, and all kinds of building materials, it being intended to take down the said house of correction.

It was also proposed to sell the land, about 5000 superficial square yards. Prospective buyers will be shown the plan by Mr Whitaker, the governor.

However, there still appeared to be some form of gaol in existence following the demolition of the Middlewich House of Correction. The Worcester Journal on 6 April 1872 reported the following:

A passenger train running from Liverpool to Crewe on February 24th came to a dead stand between Northwich and Middlewich, owing to the fire having been allowed to go out. the driver and fireman being found drunk and asleep on the foot plate. On Tuesday the men, William Ward, driver, and Thomas Jones, fireman, were committed to Middlewich gaol for two months.

Quotations from newspapers come from the British Newspaper Archive, a wonderful resource containing many local newspapers with reports on local prisons.