Opened in January 1914, Tring Police Station is the oldest station still in use in Hertfordshire.

Shelley Savage, from the Tring & District Local History & Museum Society, gives us a tour ‘behind the blue door’, and tells us the history of lock-ups in this beautiful, old market town.

Behind the Blue Door 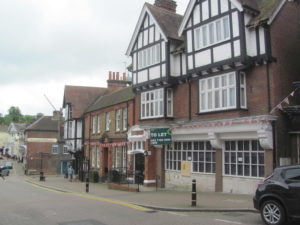 In June 2019, the Committee of the Tring & District Local History & Museum Society were invited to look behind the blue door at Tring Police Station and to hear about the history of the building.

The County Council purchased a vacant plot in the centre of the town in 1912. It had previously been occupied by a butcher’s shop and abattoir. The well-known Tring firm of builders, Honours, built it for £893, and it opened in January 1914. It is the oldest Station still in use in Hertfordshire.  Designed by a Hertfordshire County Council architect, it was originally the home of the Constable and his family, with one of the ground floor front rooms being the guardroom, where the public entered. Although we now think that it fits in well with the High Street, at the time there was criticism.

This latest addition to the architectural features of the town has been this week thrown open to view by the removal of hoarding which had hither to hidden it. Built of dull yellow bricks faced with red, it is a severe and business-like building doubtless admirably adapted for the purpose for which it was erected. But it scarcely harmonises with the adjacent buildings or adds to the beauty of that part of the High Street. Perhaps the county council did not wish to make it too attractive. Bucks Herald, 13 September 1913.

The other front room used to be the kitchen, but all that remains of that now is a traditional pantry with a fly screen. Currently used as an exhibition room, it displays both items and articles about the history of policing in Tring. One artefact still works well: a hand-operated air-raid siren which makes a deafening noise.  Truncheons and handcuffs, a uniform and logbooks of different eras are in cases, and posters on the walls tell stories of some of the most interesting crimes and major incidents in the area.

A small back room, once the family parlour, is now the interview room of the Station, with appropriate equipment, including that needed to take fingerprints in the old-fashioned way, using ink.  This room is in regular use.

No cell remains, although a small area used as an exercise yard is still there, with a high level glazed skylight. Plans show where the 13’ by 9’ cell and its single bed would have been. What happened when there were two people in occupation is anybody’s guess.  Still in occasional use are the outdoor dog kennels. When stray dogs are picked up, they are housed there until the Dacorum Dog Warden can collect them.  The rooms upstairs, originally bedrooms, are well lit and comfortable, and now used as offices for the police force. There was a redevelopment in 1937 when an extension was built to provide a bathroom and indoor toilet.

How did the policemen in the 19th century get about? “On foot” was the answer, even if they were called to one of the surrounding villages. If there was an emergency, a fast runner, usually a small boy, came to the Police Station to summon help. Horses were never used, but later bicycles enabled faster communication.  Reaching the scene was not always straightforward. The Valetta aeroplane that crashed in the woods at Tom’s Hill in Aldbury in 1954 was not found for half an hour, by which time 16 RAF men had perished.  It was that incident that stimulated the development of an emergency kit for extraordinary events. Tring Police Station has an old one in a wooden case; they have since been updated and no doubt use electronic communications instead of the old-fashioned paper forms.

Local people might remember the temporary police station in established in a shop next to the old Post Office on the High Street in 1975 because of internal modifications to the building. 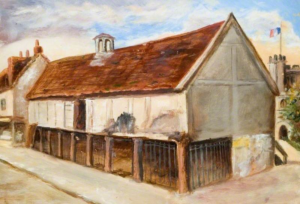 This was not the first Police Station in the town. Before that, Vestry Hall in Church Lane, close to Tring Church was used between 1866 and 1913. There could not have been much crime in those days, because there was only one permanent constable, and the building also housed the town’s horse-drawn fire engine.

The first known building to be used by Constabulary was the town’s Market House, believed to have dated from the 1650’s. This building stood on the High Street, directly in front of St. Peter & St. Paul’s Church and consisted of a large trading hall on wooden stilts. A cage and pillory were located underneath.  When the Market Hall and cage were demolished in July 1900, the date 1680 was found carved into an internal beam. Today the site of the former Market house is occupied by a bus stop and pedestrian walkway.

Many thanks to Inspector Andy Wiseman and our local policeman, PC Lazarus Clark, for their tour and enthusiastic historic knowledge. The book The History of Police Stations in Hertfordshire by A. C. Wiseman has been purchased for out Museum Library and is available for sale.