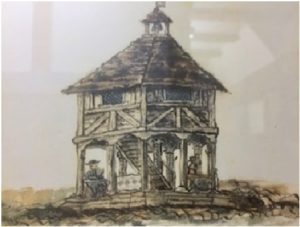 The first pictorial indication of penal correction can clearly be seen in the drawing of Cranbrook’s first market building where the stocks are evident.

The first lock-up called the ‘cage’ possibly dates from 1717 where a document found from that date says ‘Two persons were given authority to build a ‘cage’ in Cranbrook to house ‘idle and disorderly persons’. It was located on the South side of St David’s bridge later moved to the North side, it was described by F C Clark in his book Kentish Fire published in 1947.

“Framed in oak, with a tiled roof, the building 8 feet by 6 feet is lined with oak boards fixed with heavy nails, the door is studded irregularly with hand-wrought iron studs, two heavy hinged iron clasps could be padlocked across the door on the outside, small hand wrought iron grids are inserted one on each side and one at the back, one of the side grids quaintly hinged and fitted with a hasp and padlock was obviously used as a serving hatch, the three grids totaling about a square foot in area provide the only light and air for the prisoners.” 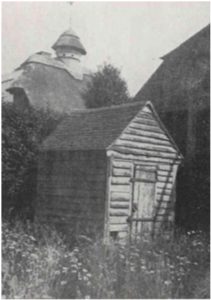 The ‘cage remained in this location until about 1851 when it was removed to Wilsley farm where among other uses it did duty as a chicken-house.

In about 1935 the ‘cage’ was removed to the Alexander family’s residence the historic 14th century Clothiers House Old Wilsley where it resided until 1986 when Mrs. Alexander kindly donated it to Cranbrook Museum, it was transported to the museum and in 1987 re-constructed by two volunteers. It can still be seen in the grounds of the Museum today. 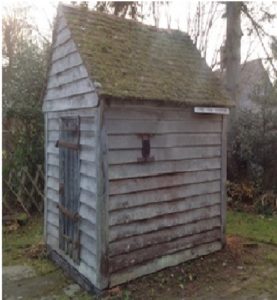 In February 1850 the Kent County Surveyor drew up plans for a lockup house in Cranbrook similar to one in Elham, with the outer walls of brick and cement, the cells arched, the floors of the cells were to be of Seysell Asphalt or York Stone; the constables room to be floored with oak board, and with proper drainage, it was to be built on a plot of land a short distance from the place where the magistrates hold their petty sessions and not adjoining and other building, although close to the Town of Cranbrook. John Whichwood, County Surveyor, February 23rd 1850 signed the document.

The building was planned as one story only. A constable’s room in the centre with a stove and an under floor ventilation system. There was a cell on either side without windows, and a washouse and WC at the back. 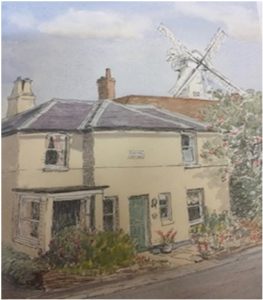 This remained the Town’s lock-up until the first first police station complete with cells was built in 1865 in Waterloo road, in 1968 this building was demolished and the current police station was constructed in Wheatfield Drive.