Our featured lock-up for this month is the Cage at Great Bardfield in Essex. 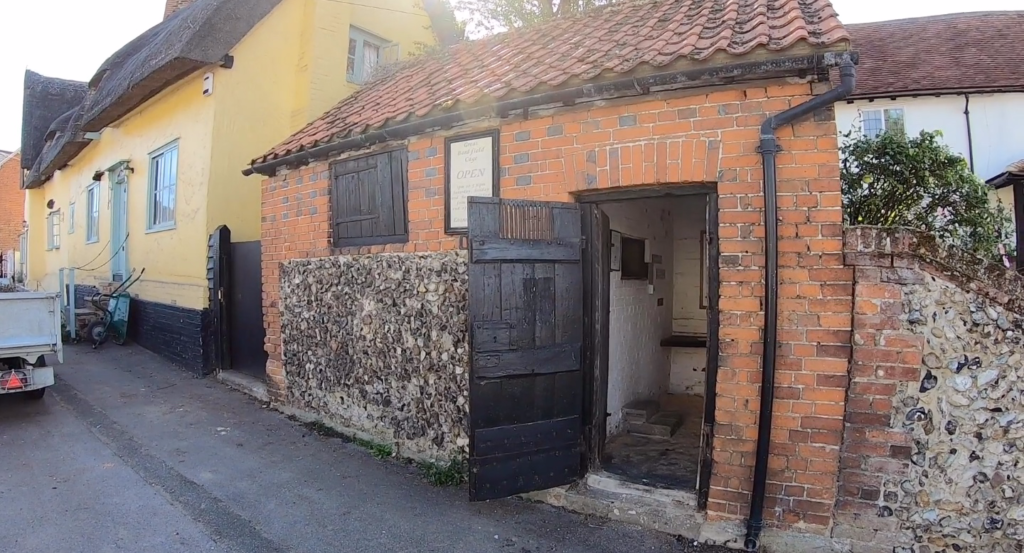 It’s open for visitors on Saturday and Sunday afternoons, and on bank holidays, from Easter through to September.

Project lead Rosalind Crone went to check it out – you can explore it with her by watching the video below.

The history of the village

Great Bardfield is a small, ancient settlement. It is mentioned in the Doomsday Book, and by the medieval period it had become a thriving market town.

It also has a connection to the Tudor monarchs. King Henry VIII granted the ‘burgh’ of Bardfield to his fourth wife, Anne of Cleves, as part of her divorce settlement, and several buildings in the parish remain associated with her, including a beautiful Grade I listed barn. It is also said that Princess Elizabeth, later Queen Elizabeth I, came to Great Bardfield to escape the persecution of her sister, Queen Mary.

In the 19thcentury, Great Bardfield parish was home to approximately 1000 people. There were several local criminal justice facilities. Petty sessions were held at the White Hart Inn about every 3rdweek during the 1840s. Following the establishment the Essex Constabulary in 1840, a police station appeared in the village, its officers taking responsibility for the wider area around Great Bardfield known as the Freshwell Hundred. The village lock-up, however, dates from before that. 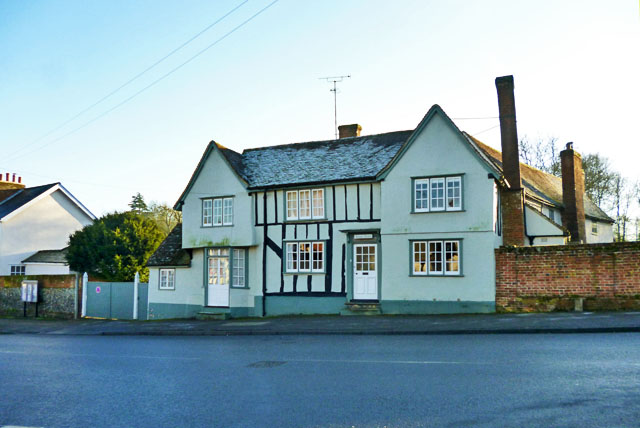 The studs nailed into the door suggest that the lock-up was built in 1816. However, the description of the lock-up accompanying its listed building entry in the NHLE suggests that it was built in the context of the Six Acts, legislation rushed through Parliament in the wake of the Peterloo Massacre in August 1819 the aim of which was to squash political radicalism. It is not clear whether Great Bardfield was a hotbed of protest at this time (local historians – please correct me if I am wrong!).

Much like other village lock-ups, Great Bardfield Cage was predominantly used as overnight accommodation for drunks and disorderly persons, as well as for those accused of crimes while arrangements could be made to send them to the county goal at Chelmsford.

It’s a red brick, rectangular building, much like other lock-ups in the local area. And it contains two cells, potentially built to allow for the segregation of men and women if both happened to be in custody at the same time!

The first cell also has two doors, each with breathing holes which do not line up when closed. This was to prevent friends and family on the outside from passing food, drink and other potential items through to prisoners on the inside. 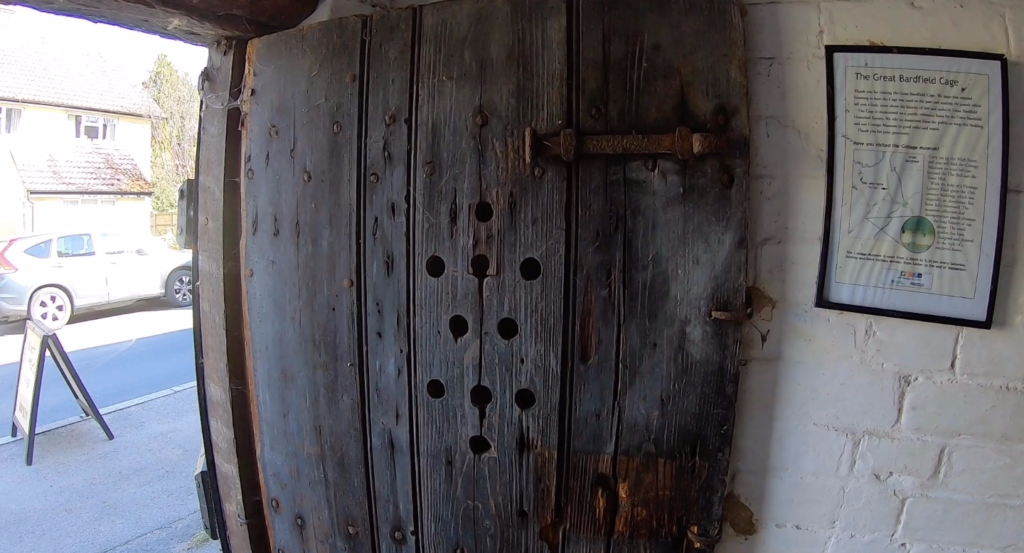 Information passed down in the village suggests that Great Bardfield Cage was last used in 1925 – less than one hundred years ago! It sounds late, doesn’t it, considering there was a police station in the village from at least 1848. In fact Great Bardfield Cage is another excellent example of the way in which village lock-ups continued to exist alongside, and be used by, new police forces for a substantial period of time. We have several other such examples in the lock-ups database.

Great Bardfield Historical Society together with the Parish Council have done a superb job of restoring the Cage, and using it to tell others about the history of criminal justice in the local area. They have dressed the second cell, with a mannequin, a local called Charlie, who has obviously got himself in trouble, a wooden bed and a chamber pot. You can see the tableaux in the second cell clearly if you turn on the light (with timer). But it is worth pausing first, to get a sense of how dark the cage was with the doors closed and windows shuttered.

Charlie the mannequin, inside his cell at Great Bardfield Cage lock-up | Photo by Rosalind Crone, 2019

If you press the yellow button next to the cut-out showing the second cell you get a recording, which tells the history of the lock-up in detail. And the Great Bardfield Historical Society have also put a series of excellent information panels about local criminal justice in the first cell. Overall, a visit to this lock-up is a very worthwhile experience.

Great Bardfield lock-up is a great example of what can be done by local communities with these important local heritage sites. Over the next few months, we plan to give you more examples and ideas.

In the meantime, if you want to do something with your local lock-up, please get in touch. We can suggest some ideas, and we can help you get started with our print-on-demand lock-up pamphlet service. You don’t need a big budget to spread the word about the history of your local lock-up – just a passion for the value of the past in the present!