Paige Chaplin from Heritage of London Trust, reveals the story behind the restoration of a rare historical monument in 21st century London. 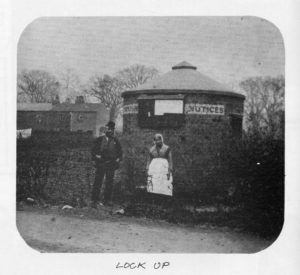 Cranford’s village lock-up housed many criminals before the area gained a police force. Located just off the old Bath Road, it dates from around 1838 although very likely there had been a lock-up here for generations beforehand. Cranford was on the main route into London from the west and many travellers passed by. Highwaymen were well known in the area – Hounslow Heath was notorious for thieves and it was said that criminals “infested the vicinity” and local residents were “kept in a state of terror”.

The lock-up was also known as ‘The Roundhouse’, ‘The Highwaymen’s Cage’, slammer and watch-house – to name a few! From the 17th century onwards, village lock ups were the most practical form of local punishment and detainment. They were not always circular, some were pentagon or square in shape and some contained one cell for men and another for women. The Cranford Lock-up is made of brick with a conical rendered roof, iron plated door and iron-barred window. The interior of the Lock Up was designed to be as uninviting as possible for all who ended up on the wrong side of its iron-barred window. Tiny, cold, damp and with limited ventilation, Cranford Lock-up would have also likely housed a concrete or wooden bed. If prisoners were in luck, this would have been lined with straw.

Lock ups largely disappeared from London by the mid-19th century with the expansion of the Metropolitan Police Area in 1839, and the widespread establishment of police stations with holding cells. The internal cells and more structured policing left lock ups such as Cranford redundant. Although it briefly gained a rather gruesome function as a makeshift mortuary, by the 20th century it was left undisturbed. 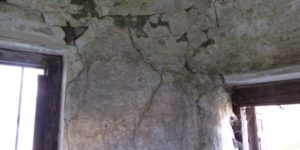 In 1939, the Cranford Lock-up was almost removed when surrounding land went up on sale. However, the Borough of Heston & Isleworth stepped in, recognising the Lock Up as a unique piece of history. The Middlesex Chronicle and Heston Ratepayers’ Association Magazine recorded that the deciding Committee determined the Cranford Lock-up significant “as the last remaining cage within the area of the Metropolitan police”. They submitted the building to the Office of Works who were responsible for delivering suggestions to the Ancient Monuments Board. Despite hopes, the Lock-up was rejected on the grounds of being of local rather than national interest. The Council however put in place an order that prevented demolition without their consent under the Town & Country Planning Act of 1932. The Lock-up and surrounding land was then sold to the Council in 1948 and formally listed Grade II on 21st May 1973. 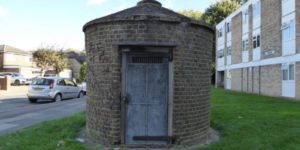 Restoration work in the 1960s which used cement render caused some damage to the structure, and by the 2000s, the brick work was badly cracked invasive ivy billowed over its roof. Its iron bars were damaged, few knew its history or significance and local people used it as a large refuse bin. In 2016, Heritage of London Trust and Hounslow Council joined forces to restore Cranford Lock-up – a fascinating insight into crime and punishment in London before the existence of a regulated police and punishment system.

The restoration was carried out in late 2017 by Taylor Pearce Conservation. The entire roof covering was removed, along with the ivy that had grown so vigorously, the underlying brick dome was consolidated and repointed, and loose and damaged brick work removed or rebuilt. All brickwork was subsequently cleaned to remove damaging organic growth and the roof covering reinstated to original form using lime render. Inside, missing pieces of plaster were filled in and the window bars re-set and timber frame replaced. The door was re-hung and re-set, also returned to its original state. Heritage of London Trust advised against inserting a glass panel in the window in order to retain the original significance of the building as far as possible. 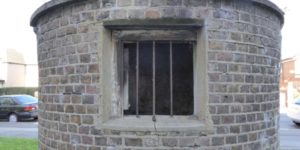 The project fitted well with Heritage of London Trust’s interest in neglected but fascinating local buildings and monuments – in this case also a crucial part of London’s social history, a link to early policing history and a wonderful asset to the local community – a unique educational tool for nearby schools.

Heritage of London Trust hosted a launch party for the local community on the 6th December 2017, attended by local Councillors and all involved in the project, as well as its neighbours and the local primary school. All were invited to rediscover its history and explore inside. The site is now a local destination, with schools regularly visiting and is well cared for by the Council. If you would like to take a step inside an original lock up once housing west London’s thieves and felons and imagine life as a Victorian rogue, you are in luck! You can visit by booking an appointment with key-holders James Marshall and Samina Umer. Contact via email: LocalStudies@hounslow.gov.uk or call 0208 583 3322.