The Castle Cary Round House

Local historian, Chris Hicks, tells us about the various uses of the Castle Cary Round House over its lifetime, from holding pen for truant children to licensed wedding venue…

Primarily intended for the temporary incarceration of drunkards and other miscreants, the Castle Cary Round House is one of the few surviving examples of a circular lock-up. 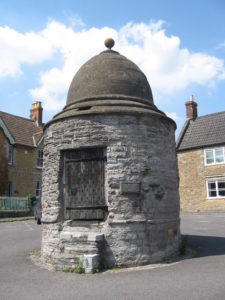 Many others of various shapes, mainly square, rectangular and octagonal, can be found throughout the country and although some have been much altered or converted for other uses, a significant number are now listed buildings. They date mainly from the eighteenth and nineteenth centuries although there are references to round houses as places of detention as early as 1589. Offenders would be locked up here until they sobered up or a magistrate was available to deal with them. Typically they have one door and may possibly have a small window high up in the wall hence the common name ‘blind house’, although they had other names in various places.

In Castle Cary the decision was taken in 1779 at a Vestry Meeting at the Angel Inn that there was a need of a temporary lockup. To cover the cost of building the funds of three small charities were appropriated and it was built on Bailey Hill ‘where the tree stands.’ According to the overseers accounts the final cost was £23. In 1785 when the Sunday School was established the Committee resolved that; ‘if any children above the age of seven years are found in the streets, &c., breaking the Sabbath, they shall be taken up and locked in the Round House during school hours.’

No records exist to show how much use was made of the Round House and the story that on one bitter winter’s night, during the Christmas festivities, an unfortunate prisoner froze to death may be apocryphal. It is also claimed that the last prisoner to be confined here made good his escape through the drain. Another popular story says that the domed roof was the inspiration for the shape of the police helmet.

Lock ups fell out of use after the County Police Act of 1839, which established proper police stations with holding cells, came into force. In Castle Cary the constable was housed in the Market House (built 1855) and two cells were inserted into the ground floor. With the Castle Cary Round House falling into disrepair it was eventually given to the town by the then lord of the manor, Sir Henry Hoare. Various repairs were undertaken and today it remains a quirky curiosity for visitors with the keys available for those who want to experience how incarceration felt.

Recently it has been licensed as an unusual wedding venue. There is just enough space inside for a bride, groom and registrar. According to Castle Cary Town Council promotional material: 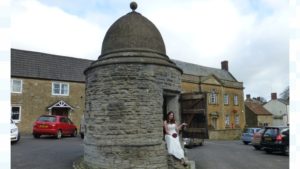 The bride and groom are able to make their vows under lock and key – and manacles if necessary. Couples looking to inject an element of humour in their special day will revel in the ‘dramatic irony’ this building provides.

Anyone fancy entering into Holy wed-lock?

Around the country there are over 150 surviving examples of lock-ups. Circular lock-ups are relatively uncommon, although not as rare as the plaque on the one in Castle Cary would suggest. This says that there are four in the country but recent research has so far revealed a total of eleven others. The others are located in Wiltshire at Shrewton, Everton on Merseyside, at Alton in Staffordshire, Harrold in Bedfordshire, Shenley in Hertfordshire, Digby in Lincolnshire, Breedon in Leicestershire, Pangbourne in Berkshire, Great Weldon in Northamptonshire, Holme upon Spalding Moor in Yorkshire and Barmouth in Gwynedd. This last one has two cells instead of the usual one, each with its own external door allowing the constable to lock up men and women separately.

Castle Cary Museum has a collection of pictures of roundhouses, in the same style as the Castle Cary Round House. Also available from the Museum is Chris Hicks’s book, in which the story above originally appeared: