The establishment of Berkhamsted’s house of correction in the mid eighteenth century marked the beginning of over 200 years of imprisonment and policing on the same site. Houses of correction, or bridewells, were established nationwide in the late sixteenth century to punish and reform petty offenders through hard labour, and Hertfordshire’s served several towns within an administrative district, or ‘hundred’. It is unknown when Berkhamsted built its first bridewell, or where it stood, but Hertford’s quarter session records refer to its sale for £30 sometime before July 1638. The house of correction for Dacorum hundred likely relocated to nearby Hemel Hempstead after this date, leaving Berkhamsted without its own bridewell for over a century.

In 1763, Dacorum’s chief constable complained that the hundred no longer had a proper bridewell so quarter sessions’ justices tasked Berkhamsted’s vicar and magistrate, Thomas Herbert Noyes, with finding a location and estimates of building costs for a new one in the town. Reverend Noyes’ dealings with Berkhamsted’s constables reveal that he kept an exceptionally tight hold on the parish purse and this may have been why he suggested converting three existing properties, instead of building from scratch. In September 1763, Hertford’s clerk of the peace bought these three buildings from George Rose Jnr. for £120. The deeds described them as two messuages and land ‘called the Barkside’ and ‘known by the name or sign of the Cock’ (so a former pub), once occupied by Job Beesly and Samuel Axtell on the north side of the main road. The third house was tenanted by Francis Gould. All stood on the corner of Kings Road, later 187 High Street. Justices allocated a further £120 for the conversion works. 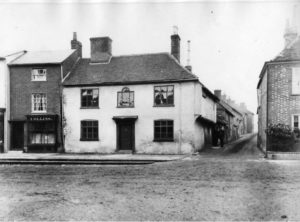 In April 1764, George Hoare became the first keeper of the new bridewell, receiving £20 a year salary and the profits of prisoners’ work. He also continued in his main employment as a heelmaker, became one of Berkhamsted’s two constables in 1766 and further contracted to run the parish workhouse in 1767. His widow, Sarah, took over as bridewell keeper on her husband’s death in 1769 but resigned in 1773.

Howard’s 1780 report on prisons described the conditions at Berkhamsted. The bridewell had separate workrooms for men and women, and a dungeon 13 feet by 9½ that lay nine steps below ground. The latter had a very damp earth floor, no window, no straw for bedding, no water and no outdoor space. Prisoners were allowed a pound weight of bread each day and the keeper, shoemaker William Rogers, employed prisoners in cutting pegs in 1804. However, the bridewell had few occupants because justices committed only around fourteen prisoners a year to Berkhamsted, so Howard’s report recorded no prisoners in November 1776, and only one in April 1779. Neild’s 1812 prison report added that Berkhamsted had a room for men (12 feet by 10) and one for women (14 feet by 10), with straw and two blankets for sleeping. Each dormitory had an iron-grated window and a courtyard only 18 feet by 12 for an hour’s daily exercise, but a sewer ran through it. Bread rations had increased to 1½ lbs a day.

Although newly refurbished in 1764, justices received the first complaints about the bridewell’s unsatisfactory state in 1779 and ordered carpenter John Bunn to make repairs costing £52 14s. It was further improved in 1784 after justices appointed Berkhamsted’s serving constable, Henry Russell, as the new keeper, although Constable Russell soon claimed £7 2s. for retaking Thomas Wilday who escaped from the bridewell ‘thro the weak state thereof’. That same year, both Russell and his fellow constable, Robert Loader, claimed expenses in their parish accounts for holding suspects overnight in the Red Lion and Kings Arms, presumably because they were more secure. Additionally, at least two more prisoners escaped from the bridewell in the 1780s, despite being held in chains. Although Constable Loader, a carpenter, carried out major repairs in advance of a 1789 justices’ report on the county’s bridewells, the report still branded Berkhamsted’s as damp, poorly ventilated and insecure, with prisoners able to communicate through the ‘raddeled’ mud walls. Prisoners also had little access to water, no employment and no furniture, so justices considered discontinuing the bridewell’s use and sending prisoners elsewhere in the county. However, they eventually decided to improve security again and close off the dungeon. 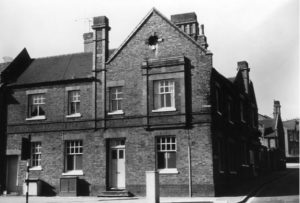 Over the next thirty years, the county’s justices continued discussing the poor security and conditions at Berkhamsted bridewell and pouring money into repairs, whilst the town’s constables still opted to hold prisoners in inns. In 1826, another survey deemed it uneconomic to repair and justices ordered its sale, although no buyer came forward and its use continued. Berkhamsted’s magistrates had the interior reconfigured in 1835 to provide individual cells for solitary confinement, claiming that the bridewell was now both useful and cost effective. However, a government report in 1840 found Berkhamsted bridewell unfit as a place of correction because its poor regulation, understaffing and unsanitary conditions fell below statutory requirements. Following expansion of the county gaol in 1842, justices closed all of Hertfordshire’s bridewells, but Berkhamsted’s remained unsold once more and was eventually offered to the newly-formed constabulary as a police station. Thereafter, the new police officers lived and worked on the premises, sometimes with their families.

Unsurprisingly given the old bridewell’s long-standing disrepair, Hertfordshire Constabulary rebuilt and significantly enlarged their station house in the 1890s on the same site, where it originally accommodated one inspector and three constables. By the 1950s, the force had outgrown the premises and so converted any living accommodation to offices. The constabulary then commissioned a new building in the 1970s, still at 187 High Street, to provide a small custody suite of one male, one female and one drunk cell, plus detention and charge rooms. However, this station’s closure and demolition in 2011 ended over 200 years of imprisonment and policing in that location. The constabulary currently maintains a presence in the Civic Centre at 161 High Street, Berkhamsted but has no cells nor facilities to detain offenders there. 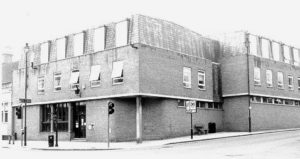 Berkhamsted’s later police station, built in 1972, also on the corner of the High Street and Kings Road – courtesy of Berkhamsted Local History and Museum Society