A History of Local Imprisonment, by Simon Walker 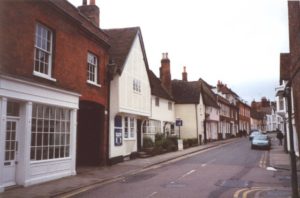 The first recorded bridewell in Hitchin lay at the lower end of Tylers (Tilehouse) Street, next to the workhouse, between the junctions of Sun Street and Bucklesbury, and on the south side of the road.

Commissioned by Sir John Spencer and Sir Ralph Radcliffe in 1693, it had ‘two little windowes’, a few plank beds, ‘a block to knock hempe on’, a whipping post and three other posts for madmen and desperate prisoners.  It cost £43 4s. 5d. to build, of which Hitchin’s inhabitants contributed only £20 because they were already making substantial payments towards the new county gaol at Hertford.

‘It has two small Windows with Shutters which are necessarily shut close every Night to prevent the people in the Yard giving the prisoners Implements whereby to Escape, which is frequently done.  The Upper Part is the Women’s prison, divided into two Rooms…The Necessary belonging to a very large Work House adjoins the lower prison and is excessively offensive.  There is no Chimney, no Water, no Opportunity to give any Air, no Furniture of any kind or any Employment’.

At the date of the report, the bridewell held eight prisoners.  Its keeper, who received £24 per annum salary, lived a quarter of a mile away and only attended once a day to let the prisoners out.  He claimed that the stench from the Necessaries (lavatories) was so unwholesome that prisoners sickened and often died after a fortnight’s confinement.  The justices’ 1789 report concluded that Hitchin Bridewell should only be used to detain prisoners for future examination, or for minor offences.  It further recommended that anyone due to serve longer than fourteen days should be committed to Hertford Bridewell.

However, Hitchin’s inhabitants expressed concern about the possible closure of the town’s bridewell.  They wrote to the quarter sessions’ justices in October 1789 to impress upon them the need for a bridewell in the north of the county and the heavy expense of having to carry offenders to Hertford instead.  The loss of Hitchin’s bridewell would require suspects being held in public houses ‘which not only occasions a heavy charge upon the Prosecutor or the Parish but improper persons very often get access to the prisoner so confined and in many instances the prisoner is suffered to drink too freely and is brought before the Magistrates in an improper state.’  Furthermore, the inhabitants anticipated that any young, petty offenders imprisoned in one large, central bridewell alongside ‘atrocious criminals’ would ‘come from that place hardened and made worse instead of that amendment which may be hoped for in a place of solitary confinement’.  A justice assured Hitchin’s churchwardens that their letter had carried much weight and that he had urged his fellow justices to comply with Hitchin’s request. 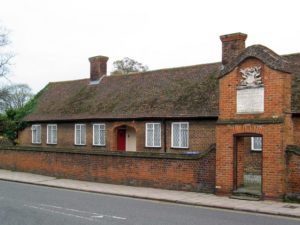 In 1807, the county surveyor recommended that Hitchin Bridewell should be rebuilt on a new site at an estimated cost of £462 13s.  Building work began that summer at the north end of Skynner’s Almshouses in Silver Street (now part of Bancroft), and beside Benge Mead (now Bancroft Recreation Ground).  Justices reported its satisfactory completion the following year, and sold the former bridewell to Emelius Delmé Radcliffe who demolished the old building and built tenements on the site.  A report of 1822 described the new bridewell.

‘It contains a dwelling for twenty eight, there are three prison rooms, two of which are thirteen feet six inches by twelve feet without chimneys.  The third is twelve feet by ten feet six inches, it has a fireplace and a chimney, the remainder of the ground forming a prison yard, twenty eight feet by twenty six.’  It was ‘solely for persons adjudged to short imprisonments under summary conviction and as a place of confinement of prisoners committed for further examination…[except when]…’a convict for felony was at the assizes sentenced to six months imprisonment in the house of correction’.

The cell block was apparently single storey, two cells opened onto the exercise yard and a third was accessed through the keeper’s house.

Hitchin’s new bridewell remained in tolerable repair throughout the 1820s but a further justices’ report in 1833 determined that it would need £100 spending on it in order to make it secure, and further recommended closing Hitchin, Buntingford and Berkhamsted bridewells.  However, Hitchin’s remained in operation until 1842 when the county surveyor suggested that it could serve as a police station.  Extra works were carried out the following year to make an additional cell, move the privy into the yard and build a stable.  William Pangbourne, an Inspector of Police, lived at the police station in 1861 with his wife and seven children.  It was subsequently inhabited by other police officers and their families. 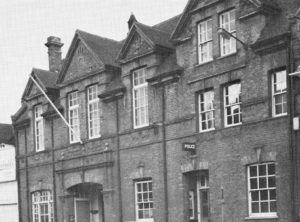 When the bridewell required further repairs in the later 1870s it was recommended that a new police station should be built.  Land in Bancroft (the site of Mr Jelly’s tinware shop) was bought from William Wilshere for £600 in 1880 with the intention of building a combined police station and magistrates’ court.  The project also included a four-bedroomed residence for the police superintendent, a three-bedroomed flat for married constables and a dormitory for single ones.  There were only three cells, seven feet by thirteen feet and a prisoners’ yard, the cells standing to the right of the yard behind the enquiry desk and parade room.  The station, opened in 1885, also provided offices for the superintendent, a guard room, a harness room and stabling.  The Magistrates’ Court was forty-four feet by twenty-two feet plus withdrawing rooms.  The force retained the old 1807 bridewell as a constables’ house and weights and measures store, but it became a private dwelling in the early-twentieth century.  Despite attempts in the 1990s to have the 1807 bridewell designated a listed building, it was eventually demolished to make way for a new Sainsbury’s supermarket.  However, archaeological work during the site clearance established that several phases of rebuilding took place during the bridewell’s lifetime, including significant changes to the layout of the cells in a single storey block and the addition of fireplaces for the male cells.

The 1885 police station and magistrates’ court saw major changes in crime and policing methods, including the introduction of motor vehicles and radio communications.  By the 1960s, rising crime meant that the cells were often full on market days or weekends, and the station now had a chief inspector, four sergeants, an enquiry officer, four or five constables per shift and civilian staff.  A larger building was required and land purchased in the early 1970s off Grove Road, on the site of the former St Michael’s College.  The 1885 police station and courts remained in use by magistrates and the probation service but the court’s business moved to Stevenage in July 1997.

The police moved into their new College Road Police Station in 1973 and the building is fairly typical of those put up in the 1970s.  It has three storeys, with single storey buildings to the rear, including cells in a block to the north.  For the present this station meets the needs of Hitchin’s police; whether it will continue to do so remains to be seen. 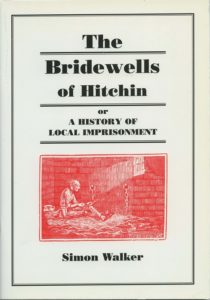 Extracted from The Bridewells of Hitchin: or, A History of Local Imprisonment. Published by Hitchin Historical Society, 1998.  By kind permission of the original author, Simon Walker.