Local historian, Rob Keep, tells us some interesting facts about the the Kirkdale House of Correction. 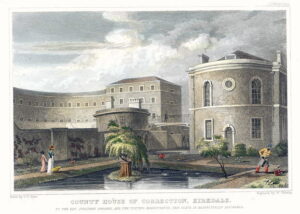 “County House of Correction, Kirkdale” (Liverpool) engraved by W.Watkins after a picture by C.Pyne, published in Lancashire Illustrated, 1831. © ancestryimages.com

This House of Correction was built in conjunction as many were, with a Sessions House, which opened in 1821, and where the Quarter Sessions of West Derby were held.

Prisoners had to work, and the treadmill used for grinding corn was the largest in the country, needing the efforts of 130 prisoners a day to keep it running.

Kirkdale had one of the highest death rates in the country for a prison. A report written in 1844 produced the following information of its prisoners:

67 Executions were held here, the highest number being 4 at one time in 1861. Following the closure of the prison, their remains were transferred to local cemeteries, 5 to a grave.

The Prison closed in 1893, demolished, the building materials sold off in 1894. Walton Prison took over as the prime local prison for Liverpool. The site is now a recreation ground, with the path’s used now being those that were within the prison.

Tod Sloan, The Treadmill and the Rope: A History of a Liverpool Prison (The Gallery Press, 1988).