How to use the Census for Prisons Research

Struggling to find information on staff and prisoners at a particular prison?

If there are no registers of prisoners or staff available, then an alternative path could be to use the Census for prisons research.

The first decennial census for England and Wales was undertaken in 1801. It was an exercise conceived in the context of war and food shortages, and its aim was to acquire a better understanding of the population of each parish – i.e. how many people resided therein and in what industry (manufacturing, handicrafts, agriculture, and so on) they were employed. No details were provided on individuals. As historian Kathrin Levitan has written, in small communities, where enumerators already knew everyone, they may have been able to complete the paperwork without making any further inquiry. Many people, then, were probably unaware that the census was even being carried out (Levitan, 2011, p. 19). 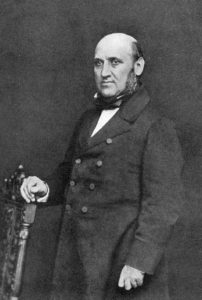 William Farr, instrumental in the design of the modern British census (wikimedia commons)

It took another forty years before names were officially recorded in the Census. This was the innovation of the new Registrar-General, Thomas Lister, whose department (the General Register Office) had taken over the administration of the census on the death of its inventor, Home Office clerk John Rickman, in 1840. Despite this important development, the information collected in 1841 still remained brief, as Lister was concerned that enumerators would be unable to cope if too many questions were included. So, relationships between members of a household were not described, ages were approximated, and information on place of birth was limited.

These restrictions were addressed in the design of the 1851 Census under the supervision of Major George Graham, Registrar-General from 1842, and the direction of William Farr, his able servant in the department. Between 1851 and 1911 (the most recently available census for public view) there was little change in the information collected about households.

Prisons in the Census

Like for households, those who resided in state institutions, including prisons, had to be described and enumerated in the official census returns. In 1841, the process was handled by the local enumerators, and not all public institutions were included. In 1851, arrangements were made in advance for such institutions to send returns directly to the Census Office and, in consequence, coverage was much more comprehensive.

The idea of a list of everyone resident in a prison – staff and prisoners alike – sounds like a gold mine for family historians and prison researchers alike. In many respects it is, as I will explain. First, though, it is important to point out that the census has one major limitation: it captured the population on a single night and only once every ten years.

If, then, you are searching for a prisoner in your family tree, you will need a fair bit of luck: your ancestor will need to have been serving a prison sentence or awaiting trial right at the very moment the census was taken. In local prisons, most accused and convicted criminals were resident for very short periods – i.e. less than three months. However, some convicts in public works prisons – such as Dartmoor, Portland and Portsmouth – remained resident for several years. 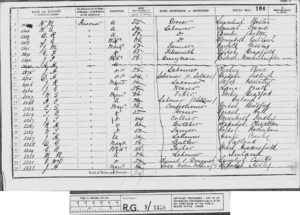 Between 1841 and 1861, convict prison Census returns only gave prisoners’ initials, as this page from the 1861 return for Dartmoor Convict Prison shows (The National Archives, RG 9/1458, with kind permission)

But before I get your hopes up, the Census returns from convict prisons present a further obstacle. Between 1841 and 1861, it was standard practice to give only the first letter of each prisoner’s firstname and surname, in other words, convicts’ initials, rather than their full names. This makes it impossible to identify individuals. From 1871 onwards, full names were given. Still, it is advisable to start with the much more complete 19th century prison registers for convict prisons before moving on to look at the census.

As for local prisons, practice for the recording of prisoners’ names varied. While some used prisoners’ initials, most disclosed the full names of those incarcerated on census night, together with their ages, former occupations, and, from 1851, their places of birth. This means that it is possible to find individuals.

However, perhaps the greatest value of the Census is that it provides a snapshot of a prison population at a particular moment in time. Even the smallest prisons were required to complete a return. As few records survive for small prisons the Census can provide a small window into the institution, revealing details about who was likely to be incarcerated there.

Even for larger prisons, the Census can be used as an alternative to the Prisons Digest or, from 1857, the Judicial Statistics, to answer such questions as the number of prisoners confined at any one time, or the spread of ages and occupations across the population of a particular prison. In the case of local prisons, the return can be used to explore what proportion of the prison population came from outside the local area.

The Census is a much better source for finding and learning more about ancestors who served as prison officers during the Victorian period. Even turnkeys or warders at local prisons were likely to stay in their job for a period long enough to give some hope of catching them in a Census. 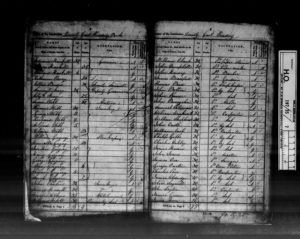 Reading Gaol in the 1841 Census, showing resident officers and their families, as well as prisoners (The National Archives, HO 107/35, with kind permission).

Again, it is important to remember that the Census captured those who were resident in the prison on a particular night. Most senior officers – governors, chaplains, principal warders, matrons – had lodgings within the prison. The returns capture not only these individuals, but also their families who resided with them. The Census also listed those warders who were performing night duty, or ‘sleeping in’, but not those men and women who were off-duty. The Census does not, then, provide an exhaustive account of the staff of a prison.

This is why it is also worth looking at the Census returns for the streets which surrounded a prison. Prison officers were often encouraged to live within the shadow of the big house, not just for convenience, but also in an attempt to isolate them from the working-class communities from which they, and the prisoners they guarded, came. Occupational information in the Census will help to identify additional staff not resident in the prison on census night. And the Census provides unrivalled information on the families of ordinary warders and turnkeys, which is of great value to both family historians and those researching the history of the prison.

Furthermore, in the case of the latter, using the Census to explore the composition of the larger neighbourhood in which the prison was located provides an avenue to exploring the relationship between the prison and the local community. 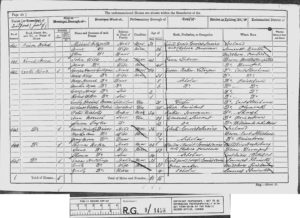 Extract from the return for Princetown, 1861, showing staff from Dartmoor Prison living in close proximity to the prison (The National Archives, RG 9/1458, with kind permission)

Lock-ups and the Census

Finally, the Census is one of the few historical sources that can be used to find out more about lock-ups. Most lock-ups in the early to mid Victorian period did not keep registers at all. And so we have little idea who was confined in them.

Again, we are dependent on chance: for example, the occurrence of a crime or disorderly act on the eve of the census which would lead to an individual’s incarceration in a lock-up at just the right moment. 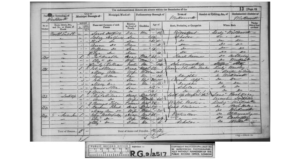 Census Return for Wirksworth, which includes the lock-up, in which, on census night, could be found a one prisoner, guarded by a Keeper and his wife (The National Archives, RG 9/2517, with kind permission)

I have not yet discovered any mention in the Census of free-standing single or double cell lock-ups in the Census returns. Those which I have come across were larger buildings, with accommodation for police constables or some kind of superintendent charged with responsibility for the lock-up. Still, the Census in this case provides valuable information on who was locked up in the lock-up – their names, ages, and occupations – as well as something about the circumstances – age, residence, family circumstances – of the individuals who guarded them.

And despite the many rumours about the use of lock-ups uncovered by the Your Local Lock-Up project, I have yet to find evidence in the census of performing bears in lock-ups, either with or without their masters! 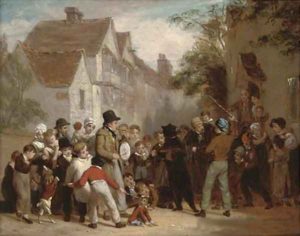 By William Frederick Witherington (1785-1865) – http://www.niceartgallery.com/William-Frederick-Witherington/The-dancing-bear.html, Public Domain, https://commons.wikimedia.org/w/index.php?curid=16303080. Dancing bears have appeared in anecdotes about the use of the following lock-ups: Woolpit Lock-up; Nether Stowey Lock-up; and Exmouth Lock-up.

Kathrin Levitan, A Cultural History of the British Census (Basingstoke, 2011)

We hope you enjoyed learning how to use the Census for prisons research!