The Yelde Hall, a rare surviving example of a medieval civic or town hall, is Chippenham’s most iconic building. One of very few remaining timber framed buildings, it is also one of the town’s only two Grade I listed buildings (the other being the Ivy).

The Yelde Hall has retained most of its original form and structure through many centuries of change and reconstruction. The latest was a major programme of renovation work carried out between 2000 and 2003. Originally the Yelde Hall stood ‘alone by itself in the midst of the street’. However, as the centre-piece of the Market Place, it was soon surrounded by several wooden market stalls (or shambles) and more ‘permanent shoppes’.

During planning for renovation in the 1950s it was decided to let the Hall once again be freestanding by demolishing the two adjacent shops. On the front (east side) was a 17th century building with half-timbered gable belonging to Teagle & Sons, auctioneers since 1890. On the north-eastern side was even an earlier building, probably late 1500s. This was Thomas Long’s Umbrella Hospital, 1877-1905. Later it became Percy Wood’s tobacconist but before its demolition in 1957 Percy Wood had changed businesses to a hairdresser.

The origins of the name Yelde is uncertain. It may be from the Saxon world for ‘old’ or it may be from a relationship to a medieval Guild. It is however a common term for this type of building in the South West of England. The correct pronunciation is also debated. It could be ‘Yeeld’ – to rhyme with ‘Neeld’ or could be ‘Yeld’ to rhyme with ‘held’.

The many uses of the Hall 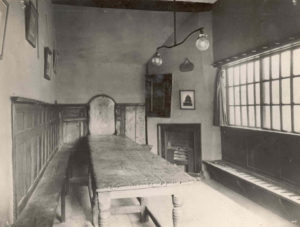 The main function of the Hall was to act a court house and civic meeting place for the town. The main hall was where local officials, the Lord of the Hundred and the town Burgess and Bailiff, held meetings and trials, such as the Hundred Courts; the Courts Baron and Courts Lets and the Petty Sessions. It also hosted the district judge and magistrates in their Quarter Session visit. These meetings controlled all aspect of civic life; rents and fees, land tenures and disputes, weights and measures, the judging of general misdemeanours and petty crime. The upstairs Council Chamber was added in the early 1600s and functioned primarily for the Bailiff and Burgess to hold town council meetings. The bailiff and burgess transferred to the newly built Neeld Hall in the 1840s.

The Hall was also the ‘church house’ (parish hall) where fundraising events for the local ‘Church ailes and plaies’ were held. In its early life it may have functioned for a time as the town’s market hall, but this use had stopped by at least the 1580s with the building of the nearby shops and shambles. It was the place where tolls for the market were collected.

Because the hall was well used it needed maintenance and upkeep. It had an extensive renovation in 1614 at a cost of £7 2s 8d and an extra £1 18s 8d for carpet. By 1632 the Hall was again in such a state that, with the Quarter Sessions upcoming, the Burgess were concerned that it was ‘nowe very unmet and unfitting for the entertainment of soe worthy assemblye’. So they hired ‘certain curtayne stuff’ from Allington House to hang on the walls and roof to protect the Justices.

The inscription ‘JS 1776’ below the town arms on the outer twin gable of the porch commemorates the addition of this feature at that date. JS was John Scott, a noted town clothier who was Bailiff at this time. The other gable once contained a clock. Declared ‘useless’ in 1851, it was given to the new workhouse (Chippenham Hospital) then under construction in 1858.

The Jail (The Lock Up)

There was a jail here from at least the 13th century and the lock up maybe older than the main hall itself. This gives weight to the theory that the current hall replaced an earlier building. The entrance door is a modern reproduction of a Tudor door.

In its life as a town jail the lock up would hold local drunks and petty criminals. However one set of prisoners is recorded in the Bailiff’s Account Book of 1709, when the town had to provide ‘1s 0d and 7 quarts of ale for the six pirates in custody’!

The lock up was removed in 1653. At some time the room was given an ashlar lining, which blocked the former internal door.

To the north of the building was a small enclosed yard (now a toilet). In the 1920s the southern end was converted into a ladies’ toilet and then again to an electricity sub-station until 1980. In 1981 removal of the remaining ashlar lining uncovered the two large timbers in front of the south window. Mortise holes in the ceiling indicate that the whole room was once lined with these sections of wooden baulks. This is extremely unusual for a jail and possibly indicates that the room was also used as a store, the lining being applied to keep goods dry. 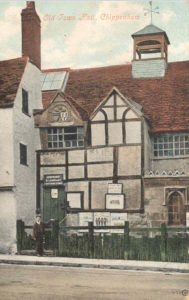 In 1846 the upstairs Council Chamber room and part of the main hall became the Armoury of the Chippenham detachment of the Wiltshire Regiment Volunteer Rifle Corps. The ‘cut-out’ indents on the benches under the window in the chamber date from this time and are where the butts of the rifles would stand. The Armoury moved to Little Ivy in 1911.

In 1870 part of the Hall was used by the fire station. Later the Fire Brigade took over the entire hall and kept all of the equipment inside. The Brigade made some substantial changes to the interior to fit the engines in. There were two bell turrets on the roof and they added two large doors on the end and a skylight to the roof. The Brigade moved to Dallas Road in 1945, where they are still found today.

The idea for a museum in Chippenham had first been mentioned in 1909. When the Hall became vacant after 1945 the idea was put forward to the Borough Council. Major improvements were needed after the Brigade left, including the removal of the double doors at the gable end and demolition of the shops on the east and north sides. The Yelde Hall Museum opened on 25 October 1963, with Mr Joseph Chamberlain as the first Honorary Curator.

By 1999 the museum had outgrown the site and moved into its current location at 10 Market Place. This gave the opportunity for an extensive programme of refurbishment, which included the re-introduction of double doors in the end wall, between 2000 and 2003. In March 2003 the main hall opened as the town’s Tourist Information Centre, which stayed there until moving to the Town Hall in February 2012.

In 2006 the Council Chamber came under the control of the museum, being furnished with a tableau depicting the situation in the town in 1816, when the end of the Napoleonic Wars was a factor in triggering an ‘affray.’ 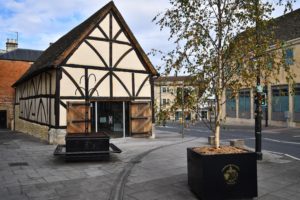 The hall is now open, enjoyed by the local community and tourists to the town. It is used for temporary exhibitions, plays, music, events and parties; a truly historic building for a modern town.

During the renovations of 2001-2003 samples, extracted from five timbers forming part of the original frame of the Hall, gave an estimated construction date of 1446-1458. There is much evidence to suggest that it was built to replace an earlier hall on the same site. This theory is given credence by a petition to Queen Elizabeth I in 1557 which claimed that the Hall had been there ‘from time oute of mynde’.

The inscription ‘JS 1776’ below the town arms on the side porch commemorates the addition of this feature at this date. JS was John Scott, a noted town clothier who was Bailiff at this time. The adjacent gable once contained a clock. Declared ‘useless’ in 1851, it was given to the new workhouse (Chippenham Hospital) then under construction in 1858.

The roof has six major trusses, five are the originals. The one over the south eastern (front) end is from 1733. Carpenters’ marks are visible on the rafters, in a series of I-Vs. Over the hall the rafters are later replacements but many original ones survive above the council chamber. The roof finish is of stone slate which is fixed to battens with wooden pegs.

At one time there were two bell turrets in the roof.. The other to the south eastern remained in use to serve as the alarm for the fire brigade. The fire bell is now on display in Chippenham Museum.

The timber frame is of oak beams, set on a plinth of limestone rubble blocks, incorporating large square padstones below the trusses. The frame is joined in three sections with double mortise and tenon joints, secured by trenails (wooden pins). On the south western side, the original framing is largely intact. Two former window openings have been filled by later staves; the mortises are visible. The north eastern wall is much less well preserved, with much of the timber being modern replacements. Original carpenters’ marks are still evident on the major constructional timbers.

The frame is in-filled with lathand plaster panels. Little of this original lathremain;, the current plaster dates from the 1963 and 2001 refurbishments. A panel on the north west end, protected by the porch, retains an in-fill of lime-washed orange loam and chopped straw, applied to wooden wattles. Original infill also exists on the north western wall and gable, where it was protected by adjacent buildings. It is not clear if the mortises for the internal partitions are original or an early addition.
Although local legend has it that there was an earth and cobbled floor for the market stalls, recent archaeological investigations have shown that it once had a suspended wooden floor, removed in the late 19th century when the Fire Brigade took the building over.

The entrance door in the porch is of cross-boarded oak, fastened with handmade nails, clenched over the back and hung on wrought iron hinges. The mouldings are of larch. The box for the wooden stock lock has a modern mortise. 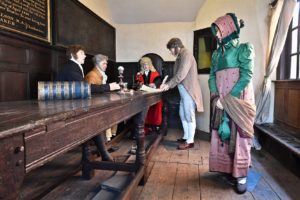 The upper floor council chamber is not original to the construction. It is thought to have been added at some point in the early 1600s. The burgesses enjoyed their comfort. We know this by the regularity with which they purchased new cushions for the benches. The Bailiff’s chair in particular is said to be extremely comfortable.
The tableau upstairs is based on real people and a real event in the town in 1816. The characters – Ralph Hale Gaby (Bailiff), Harry Goldney, John Noyes, Rev. Edward Ellis and Mart Taylor- are debating the reasons behind an ‘affray’ in the town. This was one of many incidents of civil unrest in England in the years following the end of the Napoleonic Wars, coinciding with bad harvests and, in Chippenham, the decline in the weaving trade.